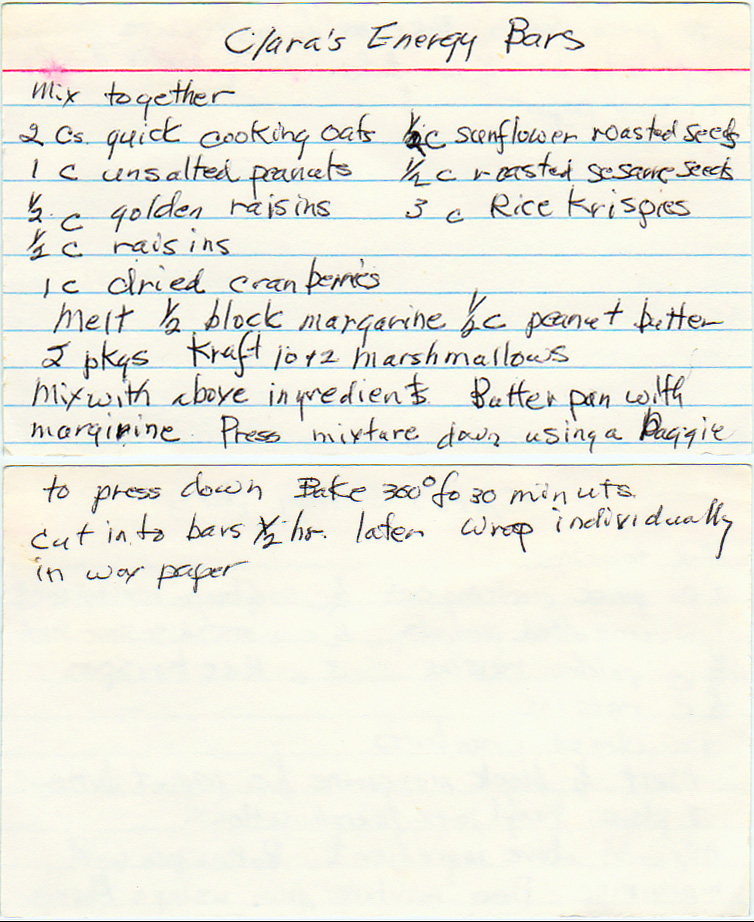 Think of all the places that sell energy bars: grocery stores, drug stores, health food stores, gas stations, gyms–even big box stores that sell computers often have cases of energy bars for the hardcore gamers who don’t want to stand up to get a pizza. They’re arguably the most widely available food in America. So where’d they come from?

Given that energy bars are designed to provide nutrition in a compact form, it probably shouldn’t come as a surprise the earliest modern energy bars were designed for astronauts. And kids who wanted to be astronauts, really.

When John Glenn became the first American to orbit the Earth in 1962’s Friendship 7, one of his most important experiments was to verify the function of the human digestive system in space. Scientists on the ground, including those consulting for the program from the Pillsbury company, chose three items for him to test.

The first two are the infamous tubes of food: one was a beef and vegetable puree and the other was applesauce. Glenn fit the tube to an opening in his helmet and squeezed the food into his mouth. (At the time, NASA scientists were terrified of crumbs coming loose and fouling the equipment; now, they know that if the food is moist, it sticks to itself.)

The third item was a ready-made product. Since 1959, General Foods made a travel drink mix called Tang that wasn’t particularly popular with consumers. NASA scientists thought this was the right way to package space beverages, so General Foods provided unbranded Tang to go with Glenn.

Tang sales skyrocketed (no pun intended), and Pillsbury noticed. Even as they developed new space foods–the next products, developed for Gemini, were starch-covered cubes of pineapple, bread, and cheese, chewy relish slices, and shelf-stable meat–Pillsbury worked on a product calculated to catch on the way Tang did.

They were still concerned about crumbs, so it had to be sort of chewy and stick to itself. And food was still being slipped through food ports in helmets, so it had to be narrow. And I’m guessing they had gotten some feedback about Tang that they took to heart.

In late 1969, the above advertisement appeared in major newspapers (that particular one is from the December 3, 1969 edition of The Pittsburgh Press). See of any of this language sounds familiar to you:

For all the space branding, consumer Food Space Sticks were about one-seventh of the size of the NASA-ready version, sweeter, and chewier. And while kids got their Space Food Sticks around 1970, astronauts didn’t get their super-sized version until 1973’s Skylab 3. (By that time, we know it was safe to take off the helmets to eat, so the bars no longer had to fit the food port.) With typical NASA enthusiasm, their press release announced that “[t]hree hundred and ninety-two bars which weigh 59 pounds have been added as high calorie supplements.”

Well, maybe that doesn’t make them sound exciting. But kids didn’t tend to read NASA press releases, and long before 1973, they were enthusiastic about Space Food Sticks.

As attention shifted away from the space program in the late 1970s and early 1980s, Pillsbury dropped the “space” part of the name, leaving them dubbed “Food Sticks.” Somehow, people didn’t flock to the product, and it was discontinued. In 2006, however, a new company brought Space Food Sticks back.

Which is good timing, because we don’t have a way to make new astronauts anymore. We barely have a space program. Maybe Russia will trade us a ride to space for some food sticks.

Oh, well. At least we’ve got energy bars figured out. One additional interesting quirk is that a couple years ago, Gatorade started selling a pre-exercise performance gel–a gel you squeeze out of a silver pouch, a little bit like John Glenn’s tube of applesauce. Maybe performance energy is getting back to its space cowboy roots.

Butter pan with margarine. Press mixture down using a baggie to press down.