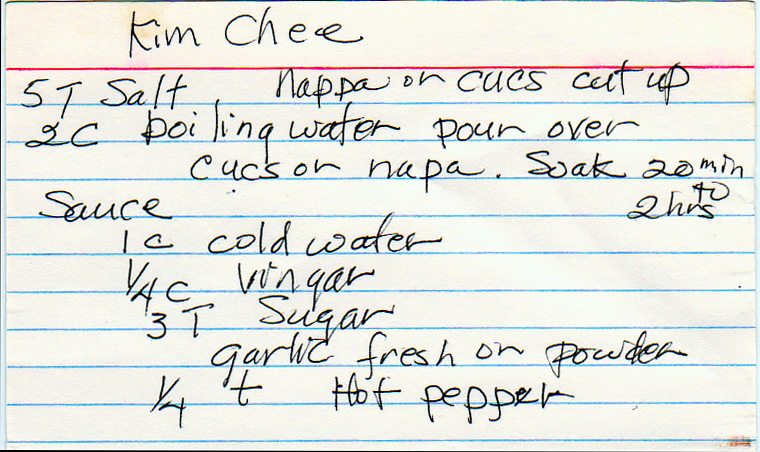 A Korean condiment with a Chinese origin.

Kimchi consists of vegetables (usually cabbage, but also other vegetables, especially radish or cucumber) that have been packed in salt or a salt solution, spiced, and fermented. The process kimchi goes through is actually lacto-fermentation, the same process that makes yogurt and sauerkraut possible.

Here’s a very simplified explanation of lacto-fermentation: in lacto-fermentation, harmless bacteria convert the sugars in the food into lactic acid, alcohol, and hydrocarbons. The lactic acid raises the pH vegetable rises prevents the growth of harmful bacteria, essentially preserving the food for some period of time.

To answer the next obvious question: if sauerkraut and kimchi are both lacto-fermented cabbage, why are they so different? One reason is that kimchi is generally prepared with more salt, but the real reasons they’re different are the same reasons a log is different than charcoal: temperature and time. Traditionally, kimchi is prepared in jars and buried in the cold Korean peninsula, meaning it’s held at lower temperatures and ferments slower. Sauerkraut is also generally fermented for twice as long.

At some point, the bacteria fermenting sauerkraut start to convert structural elements of the cabbage, resulting in a product that doesn’t have quite the same character as the original cabbage. In kimchi, the texture of the original cabbage is, for the most part, preserved; it’s not quite fresh, but it does have a texture much closer to the original than sauerkraut.

The earliest mention of kimchi is from China’s Shijing, or “Classic of Poetry,” a collection of ancient poems and songs. It’s mentioned in part 6 of the Minor Festal (that is, feast or festival) Odes, in the ode on Husbandry and Ancestor-Worship.

As translated by William Jennings in 1891:

And cots within the fields one sees;
For all the plots are lined with gourds,
And peeled and pickled all are these
To offer to the ancient lords,
That long the Latest Heir may live,
And Heaven’s full benison [benediction] receive.

From China, it traveled to Goguryeo, the ancient kingdom that covered the Korean peninsula, Manchuria, and parts of Russia. It quickly developed a reputation for the stuff, according to texts from China’s Three Kingdoms Era, 184-280 A.D.

Early Korean kimchis were preserved in just salted broth. Later on, they evolved to include small fish or shellfish paste as the salt element. Spices showed up around the 10th century, but we wouldn’t really recognize kimchi until the 16th century, when Portuguese traders brought to Korea a distinctive item they’d found in the Americas: chile pepper.