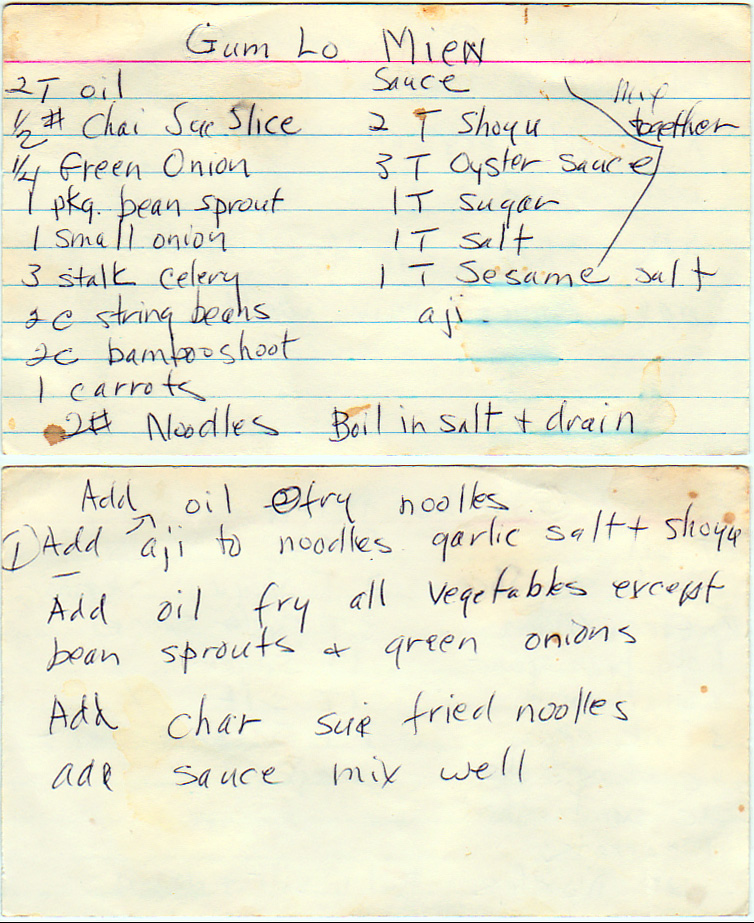 A Chinese dish with a California touch.

“Gum” in this context means “mixed” or “varied;” you’re most used to hearing it as the second half of “subgum,” meaning numerous and varied. So in a restaurant, you’d expect that would mean a mix of proteins, but here it means a mix of vegetables. And I expect we’re all familiar with lo mein, soft Chinese noodles tossed with ingredients.

That’s the major distinction between lo mein and chow mein–lo mein is tossed, and chow mein is fried. Of course, that said, lo mein is still stir-fried, just not crisp. In light of that I’ve tried to fill in some missing ideas in the recipe.

Two more quick things before we get to the quirky bit of this recipe: Shoyu is Japanese for soy sauce (I know, you probably know that, but just in case). Char siu is Cantonese barbecued pork, usually pork shoulder, which has been seasoned with a distinctive blend of spices that includes dark soy sauce, fermented bean paste, and five spice powder. The name means “fork-roast,” referring to a traditional method of making it–to skewer slices of meat on long forks and put them in a fire.

And now the quirky bit–aji. Aji could be one of two different things. In Japanese cuisine, aji is short for Aji-no-moto, a trademark for a brand of MSG. But equally likely in Southern California is Peruvian aji–a hot sauce made from peppers, tomato, cilantro, and onions.

Aji-no-moto (Ajinomoto)
A Japanese food and chemical corporation; when listed in a recipe, typically refers to their flagship product, MSG.