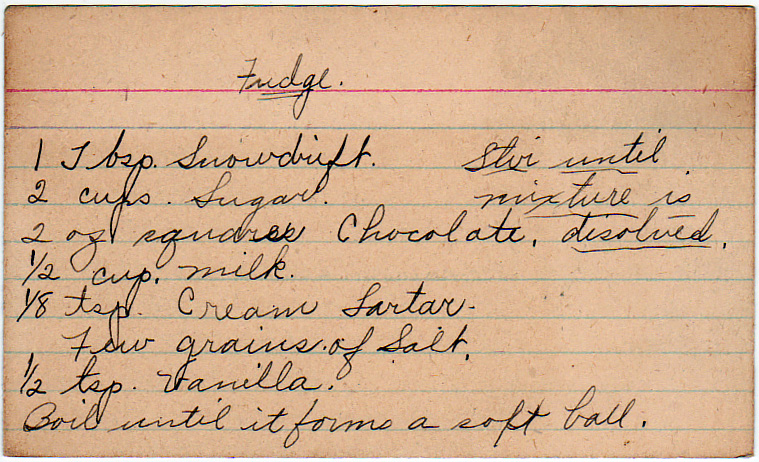 From back when a woman’s place was cooking in her elite private college dorm room.
The word “fudge” has existed in English since the 17th century, meaning either “to make suit” or “go away,” depending on which root you think originated it. Either way, it served many roles. You could offer to fudge a round peg into a square hole; your disbelieving friend could say, “fudge and nonsense” in response; and when you realized you were wrong, you could exclaim, “Oh, fudge!”

(Fudge was also a last name of Anglo-Norman extraction, which served for the mid-19th century joke of the hypothetical Oscar Fudge, a contractor who painted his name on his truck and lost business: O. FUDGE.)

But it wasn’t anything else until sometime in 1886, as far as anyone can tell. In recent posts, we talked about invert sugar and how traditional fudge differs from caramels is that it has small sucrose crystals in it, remember? That’ll come in handy, here.

The exact inventor is unknown and the exact origin is disputed, but what details we have come from Emelyn Battersby Hartridge, Vassar College, Class of 1892. According to Hartridge, in 1886, a classmate’s cousin was making fudge in Baltimore and selling it for 40 cents a pound. In 1888, Hartridge made 30 pounds for the senior auction and sold it at Vassar.

To anyone’s best guess, the likely origin behind Hartridge’s report is that, sometime around Valentine’s Day 1886, a candy-maker was trying to make a batch of caramels. To make caramels (as we learned in our Cream Candy post), the sugar must not re-crystallize. Unfortunately, this particular batch of caramels started to form small, barely perceptible crystals at the very end. Instead of being chewy, it was stiff but yielding, dissolving on the tongue.

You can easily imagine the reaction of the candy-maker: “Oh, fudge!” And fudge was born. But equally important is how fudge was popularized. As mentioned before, Hartridge made 30 pounds for a school event in 1888, and it caught on quickly.

Soon, it was a tradition at Vassar for students to make fudge in their dorm rooms, which presented certain practical difficulties. On February 24, 1894, Vassar student Adelaide Mansfield wrote to her father to wish him a happy birthday and explain the effort that went into the gift she’d sent him:

News of the confection soon traveled. A report made it into the April 8, 1895 edition of The (Brownsville, Texas) Daily Herald–impressive, given that Vassar is in Poughkeepsie, New York:

Of course, like anything delicious, fudge had some rather Victorian opponents who felt it was a vice. Remember, after all, that a generation earlier, it was thought women needed bland food that wouldn’t upset their frail composition. Consider the words of Katharine Foster, teacher at Pelton Preparatory School, to her former pupil Mary Brown, then matriculating at Vassar, on April 12, 1897 (this from a retyped collection):

From there, the fudge moved to other of Seven Sisters schools, and each school started to make its own variety. An early example of one variety (compared to the original Vasser Fudge) is in 1903’s The First Reformed Church Cook Book by the Ladies Aid Society of the Schenectady, New York First Reformed Church:

Soon after fudge started to be popularized, someone had the bright idea to include marshmallows. The most difficult part in making traditional fudge is knowing exactly when to stop cooking it. Overcook it and you make caramel; undercook it and the crystals will be too large and you’ll end up with something brittle and crunchy. The correct crystal size is essential to forming the creamy texture.

But if you include something else to form the structure–say, marshmallows, which also inhibit crystallization–you have a much bigger window of time where the product will form a fudge-like consistency. As much as you may think those are a convenience food invention of the 1960s, recipes for marshmallow fudge go back to the early 20th century, including the Wellesley College iteration, back when fudge was still something you made over gaslights in your dorm room.

Stir until mixture is dissolved.

Boil until it forms a soft ball.