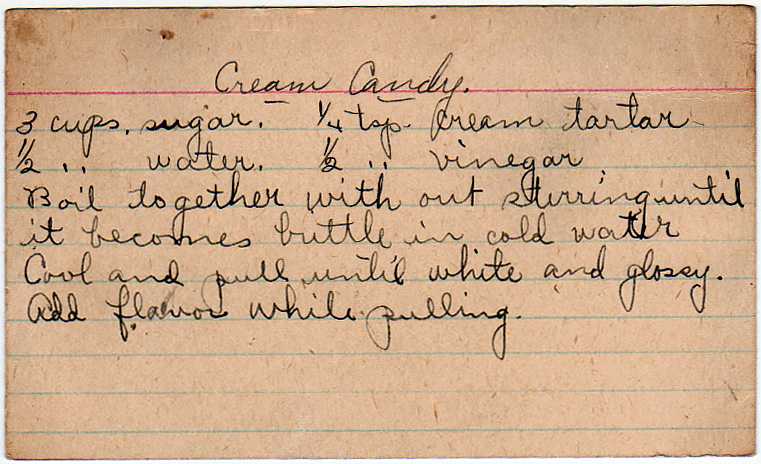 Which doesn’t have cream in it, of course. But it does have cream of tartar.

When you cook sugar in liquid and it’s hot and still in a molten state, that’s called a supersaturated sugar solution–there’s more sugar in it than that amount of water would normally be able to hold. Ordinarily speaking, when that solution cools, the sucrose would start to form crystals again. If you’re making fondant or fudge, that’s good news, because sugar crystals are what holds them together.

If you’re making taffy or hard candy like lollipops, that’s bad news. You want them to be smooth all the way through. So what do you do? Well, when we learned about invert sugar, we learned that sucrose crystals have difficulty forming in a solution with free glucose and fructose.

We also learned that one way to break sucrose into glucose and fructose is to introduce an acid. And we learned in the cream of tartar lesson that it’s named that because it’s a half-neutralized tartaric acid.

So cream of tartar in cream candy is an ingredient designed to inhibit crystallization, keeping the candy smooth. Just as in taffy, the pulling aerates the candy, and it gets lighter in color as you work. (As a side note, part of the reason this name isn’t frequently used anymore is that the phrase ‘cream candy’ is also used to describe fudge and other crystalline candies where the crystals are too small to recognize in the texture.)

Another recipe for cream candy, from the December 19, 1913 edition of The (Chicago) Day Book:

Some recipes are special because you make them by yourself and share them with the world. Cream candy and taffy are not solo adventures; in fact, they’re fun things to make with friends and family, and I don’t really like taffy. To see why, and for an example of some pulling techniques using a hook (though you can just as easily use your hands, dividing up portions of candy for each individual to pull), watch this video of one family sharing the fun:

Boil together without stirring until it becomes brittle in cold water. Cool and pull till white and glossy. Add flavor while pulling.