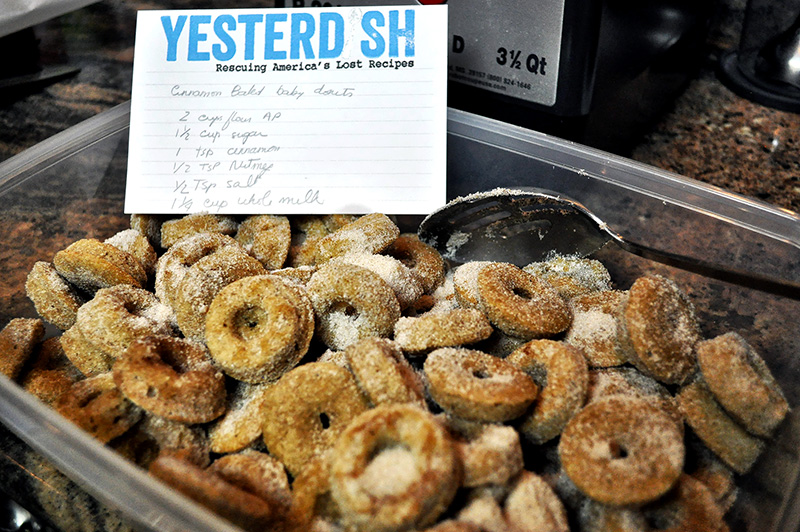 A universal favorite with an American addition. Or subtraction, I guess. If there’s ever a food in a hotel vending machine that merits two dollars’ worth of quarters, it’s the little cake doughnuts that occupy the expensive bottom real estate, next to the fruit pies and honey buns. Even though we all recognize that the contents of that package are primarily artificial flavors, partially hydrogenated oils, and six scientific code-words for sugar, the draw of the mini-doughnut is too strong.

For all the harm it does to your physical health, the mini-doughnut is best understood as a tool to protect your mental health.

The first bite is bright sweetness with a hint of cinnamon, and as it falls apart in your mouth, the richness of the cake and the undertone of nutmeg come to the forefront.

It’s a uniquely American reward, connecting the home of Dunkin’ Donuts in Quincy, Massachusetts to the 23-foot-tall decorative doughnut atop Randy’s Donuts in Los Angeles and the various Springfields that want to be the home of noted fictional doughnut aficionado Homer Simpson.

But there’s still a tastier alternative. And one that’s slightly (slightly!) healthier, too.

Don’t get me wrong. I wouldn’t say this is a breakfast substitute for the egg white omelette. But by avoiding the fryer and focusing on just a dab of butter, there’s a little bit of a caloric savings. More importantly, there’s a great benefit to taste. That’s partially because butter tastes better than oil, and partially because reducing the greasiness of the first doughnut avoids coating your tongue with a layer of oil that impairs your ability to taste the second through sixth doughnuts. (Your eating habits may differ from mine.)

While many cultures made doughnut-like preparations over the years, and references in English cookbooks date back to the 14th century, it was probably the Dutch and their oliekoecken (oil cakes) who first prepared them on our shores. The Dutch iteration were fried balls of sweetened yeast dough. It wasn’t until around the 19th century that the doughnut took on its iconic shape.

Maine native Hanson Gregory claimed to have invented the modern American doughnut’s iconic shape when he was working on a shipping vessel in 1847, when he was just 16. (Put an asterisk on that, for reasons I’ll explain below.) He felt that doughnuts with more twisted shapes tended not to cook evenly, and that doughnuts with a center tended to be raw in the middle, so he claims to have punched holes in the dough with a round tin that held pepper and fried the doughnuts that way.

Whether or not Gregory was the innovator of this shape, it was common by the dawn of the 20th century, and became iconic in World War I. To boost morale, the female volunteers for the Salvation Army would set up canteens in abandoned buildings near the front lines and serve coffee and baked goods. The product that would become the most famous from this was the product that would be cooked the fastest. The left image is from the February 23, 1919 The Washington Times, while the image on the right is a cover of the sheet music to the song mentioned on the left:

The girls who worked in in this capacity quickly became known as “doughnut girls” or “doughnut lassies;” when revived in World War II, they were “doughnut dollies.” (Some people incorrectly think this is where the term doughboy comes from, but that term was in use to describe infantry in the Mexican-American war, long before the first doughnut dolly was around to fry anything.) Which brings us back to Hanson Gregory, who made his claim in 1919, the height of the doughnut-enthusiast’s patriotic pastry fervor. I’m not saying I have any reason to doubt his story, but there’s no evidence to support it other than his assertion, and there was a great incentive for someone to take credit for the fuel that kept our boys going in the trenches.

You don’t have to be a soldier to appreciate these doughnuts, of course. The first bite is bright sweetness with a hint of cinnamon, and as it falls apart in your mouth, the richness of the cake and the undertone of nutmeg come to the forefront. The only risk you’ll face in obtaining them is that the smaller size can lead your brain to tell you it’s okay to eat more.

Oh, well. Back to being mental health food only…

Mix all the ingredients for the batter–fill cavities 3/4 full.

Bake 17 minutes; cool for 5 minutes. Dip in melted butter [or brush on the butter] and roll in sugar [mixture]. Serve!