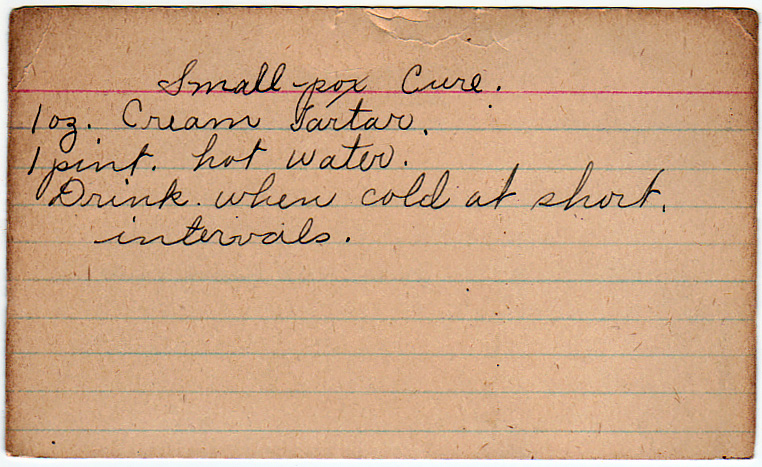 The good news is that the dangerous strain of smallpox that the author of this card was worried about was eradicated in 1977 by a vaccine.

The bad news is that smallpox is viral and there isn’t a cure, as such, though you can survive the attack and go into remission. (George Washington, Abraham Lincoln, and Andrew Jackson all contracted and then survived the disease.) At the time this card was written in the 1920s, smallpox killed about 30% of the people who contracted it, and as many as 80% of small children. So smallpox was bad and this did nothing to help.

The really bad news is that cream of tartar is about 21% potassium. In high doses, potassium can be toxic, causing an irregular heartbeat, and ultimately, death.

How high does the dose have to be? Conveniently enough, we know a fair bit about how much potassium it takes to kill someone, thanks in part to our use of potassium chloride as the third portion of state-administered lethal injections (though it takes far less potassium to kill intravenously).

An “LD50 number” is the dose of a substance that will be lethal in half the people to which it is administered. Based on potassium chloride’s 2.5g/kg LD50 number when taken orally (that is, a dose of 2.5 grams per kilogram of a person’s weight will be lethal for half the people who take it). I did some calculations to estimate how much cream of tartar, taken orally, would be required to achieve a lethal potassium intake (given that potassium chloride is about 39% potassium and cream of tartar is 21% potassium):

All of these calculations assume the person hasn’t had any other potassium during the day. The recommended daily allowance of potassium for an adult is 4.7 grams. For a child, it’s 3.8 grams per day.

That leads us to the following table:

So for small children, this cure could be worse than the disease.

Drink when cold at short intervals.

Yesterdish warning: Don’t do this. Number one, you don’t have the smallpox they were worried about, and number two, it wouldn’t work if you did.