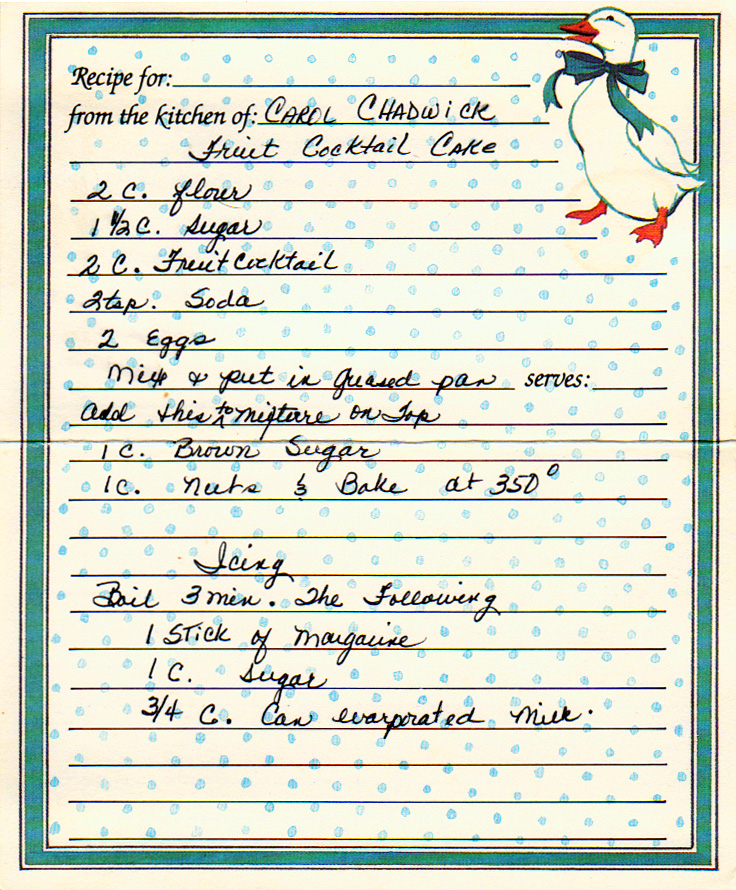 How produce scraps became a cake for company.

In 1893, a canning plant in Campbell, California owned by J. C. Ainsley added cherries to cut-up pieces of fruit that weren’t high-enough quality to can whole. He attached a label to this conglomeration of scraps:

Fruit salad didn’t become fruit cocktail until a few decades later. There are multiple theories of its origin (including that it was canning plant workers on the floor who changed the name), but the most recognized story is that Herbert Gray changed the name on cans from San Jose’s Barron-Gray Packing Company in 1930.

In 1944, Barron-Gray was putting out a call for women to join the workforce and help ship the now-beloved fruit cocktail to our boys overseas. From the August 22, 1944 edition of the San Jose Evening News:

(As a side note, yikes, condescend much?) As wartime rationing took over, grocery store shelves got leaner and leaner. When the war ended, three things changed. One, America’s new industrial capacity led to a rapid increase in wealth. Two, some of that capacity was devoted to creating ready-made foods; by the 1950s, grocery store shelves had about 4,000 different items, according to Sue Dawson’s Unforgettable: 100 Years of Timeless American Recipes.

And third, many of the women who were displaced by returning G.I.s incorporated these prepared foods into their recipes and diet, either because they didn’t want to return to the time when they’d spend hours cooking from scratch, or because it was considered a sign of affluence. So 1893’s produce scraps became 1950’s cake for company.

A similar recipe (and a picture of the dish) appeared in the May 11, 1960 edition of The Southeast Missourian, where it accompanied the following recipe:

Mix and put in greased pan.

Add this to mixture on top: