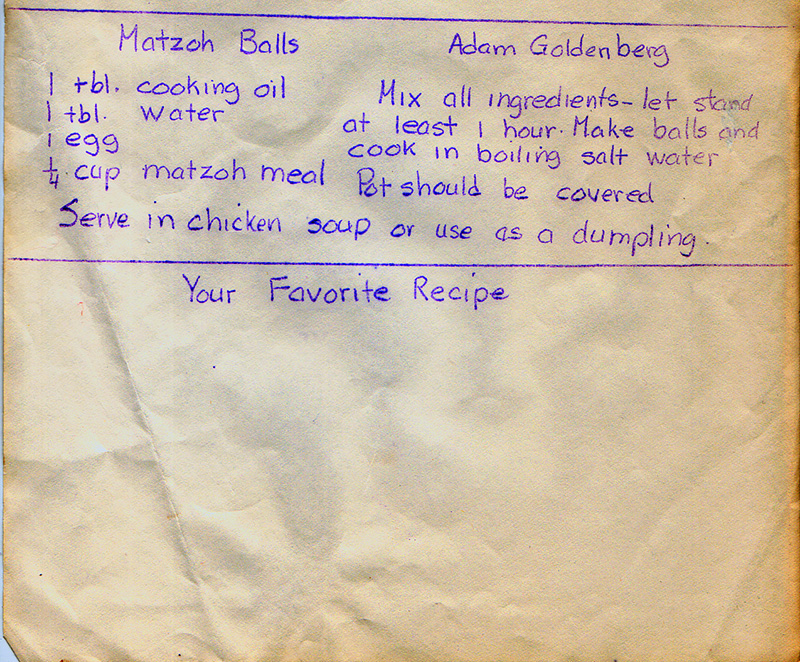 The last recipe from my preschool cookbook. I mean, the original recipe for matzoh was reported by Moses, a little-known Egyptian writer better remembered for his travel essays: And they baked unleavened cakes of the dough which they brought forth out of Egypt, for it was not leavened; because they were thrust out of Egypt, and could not tarry, neither had they prepared for themselves any victual.

What’s somewhat more interesting is the 19th century advent of automation in the preparation of matzoh. To adhere to strict kosher dietary laws, once moisture is introduced to flour, it must be baked within 18 minutes, because the leavening process will begin that quickly. (Not enough to make a baguette, mind you.) For countless generations, then, the process had remained the same: a ball of dough was taken, quickly worked into a circle, and baked.

It would be impossible for me to fully explain the concept of a mitzvah here, but I’ll try: technically, a mitzvah is one of 613 Talmudic principles set down as as absolute and immutable by God. Of those 613 principles, only one is a direct commandment to eat something: it is a mitzvah to eat matzoh on the first night of Passover. The cultural significance of mitzvah, broadly speaking, is that observing these rules brings one into closer communion with God. So when Frenchman Isaac Singer (not the American Isaac Singer, the sewing machine innovator from New York) invented a machine that automatically rolled matzoh in 1838, it sparked a religious debate. One that sounded much like our current arguments over large retailers moving into town.

The rabbis who opposed automation argued that part of the significance of the commandment was to commune not only with God, but with one’s heritage, and this departed from that; that it was bad for the poor, because it eliminated jobs of rolling matzoh by hand; that matzoh had to be made by an observant person, and machines don’t have religion; and that, because of these concerns and others, machine-made matzoh was not sufficient to observe the mitzvah of eating matzoh.

On the other side were rabbis who had no objection to the process. They pointed out that the commandment was to commune by eating matzoh, not by making it; that it was good for the poor, because it made matzoh cheaper so they could afford more; that the automation made the process faster and thus resulted in matzoh made well within the 18-minute constraints; and that, because of these benefits, machine-made matzoh was not only sufficient, but in some ways preferable, to fulfill the mitzvah.

The debate was well underway when Rabbi Dov Behr Manischewitz emigrated from Memel, Prussia (now the Lithuanian city of Klaipėda) around 1886. (As the story goes, his actual family name was Abramson, but he bought a passport with the name Manischewitz to get to America.) Ultimately, Manischewitz was able to influence the debate in a few ways. One, Manischewitz argued that matzoh is kosher if it’s made by a religious person, so if a religious person was operating the machine, it would still be a mitzvah to eat it. Two, Manischewitz employed other like-minded rabbis to certify his product as kosher, so if you didn’t want to take his word for it, you could take theirs. But perhaps most importantly, it was much harder to argue with Manischewitz on the topic, who spent 13 years in the Holy Land studying the Talmud himself, and who, by 1900, could legitimately be called the world’s Rabbinical authority on matzoh.

By the time his son Jacob took over in 1914, the process was entirely automated, and in 1920, Jacob said they could turn out 1.25 million matzoh daily.

The most enduring innovation Manischewitz contributed? He made the matzoh square, rather than the circles it had always traditionally been.

So there’s a bit of matzoh. As for matzoh balls, their yiddish name is knaidel, thought to be borrowed from the german knödel. Knödel are dumplings made from potato (in which case they’re like round floating gnocchi) or bread (in which case they’re like balls of eggy Thanksgiving stuffing). It seems a pretty straightforward evolution; remove the leavened bread and replace it with matzoh. (In the 19th century, they were often made with schmaltz; that practice produces something with a substantially more pronounced flavor, but fell out of favor once kitchen oils were widely available.)

One last thought: one of the Talmudic lessons one is supposed to learn about matzoh is the concept of performing a mitzvah when the opportunity arises and not waiting. Just as matzoh must be made very soon after mixing or it’s no longer kosher, good deeds in general should be done when the opportunity arises and not put off for a later day, because later may be too late. I like to think of that, and remember to help right away when I can help someone.

Pot should be covered.

Serve in chicken soup or use as a dumpling.