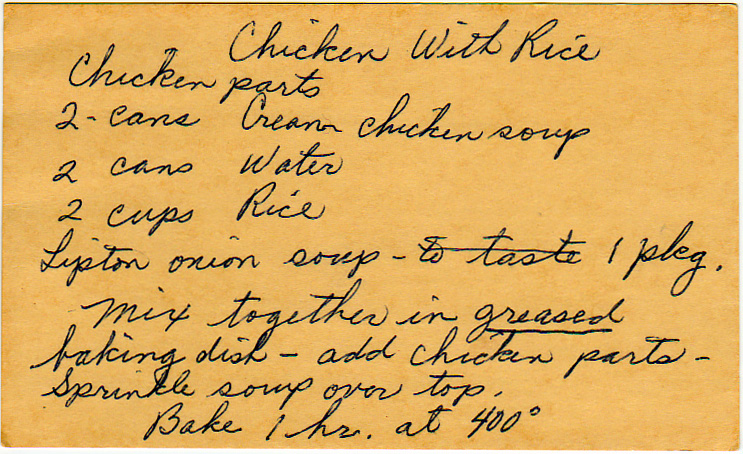 A casserole using a 1950s favorite. Thomas J. Lipton was a Scottish immigrant who came to the U.S. in 1865, just as the Civil War was ending, and worked odd jobs before returning to Scotland to work in his father’s store. A disagreement over modernization led to Lipton opening his own store, which turned into a chain of 300, built substantially on the strength of a supply chain that lowered the cost of tea to the public.

Lipton was forced out of the company in the 1920s, but the dual focus–tea and food products–remained. The company looked to improve profitability, and a new product was on the horizon to help do that.

Soup mixes started to appear on American shelves in the 1930s; in 1941, the Thomas J. Lipton Company introduced its first mix, the “Continental Noodle Soup” mix. (Why Continental? I haven’t discovered that yet, but I can tell you Lipton’s use of the name predates the Australian company that produces a very similar product by about thirty years.)

The real hit was to come in 1952, when Lipton introduced its onion soup mix. Sometime around 1954, an unknown California woman started combining Lipton’s onion soup mix with sour cream, creating California Dip, and Lipton quickly not only incorporated that recipe into its advertising, it started to make new recipes to go with its mixes. It even started introducing “soup mix” flavors for things that would make strange soups but delicious meatloafs, gravy, or casseroles. (Have you ever seen a mushroom and onion soup? But Lipton made a mix for one.)

The timing couldn’t have been better. The rise of the casserole in the 1950s, combined with the incorporation of name-brand prepared food into cuisine as a sign of affluence in the 1960s, firmly cemented casseroles like this one in the American culinary consciousness.

Not sold on soup mix yet? Don’t decide until you hear from Arthur Godfrey, from 1956 and his Talent Scouts show, brought to you by Lipton Soups: