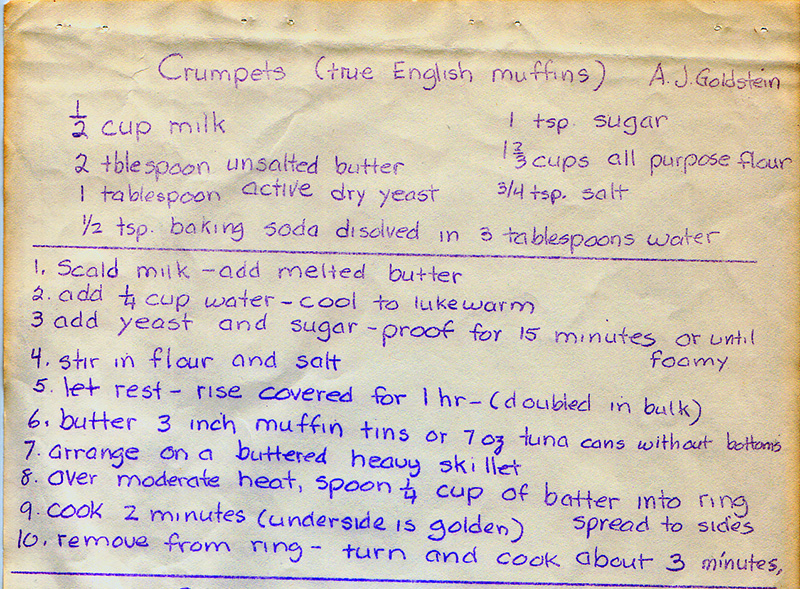 Over on The Kitchn, Emma Christensen has a great post about how crumpets and English muffins are different (though read the footnotes for some important asterisks to the conclusions). In short, crumpets are typically made with milk, cooked on one side (though frequently toasted on the other), and have a crisp outside but an interior with a texture closer to a pancake. English Muffins are cooked on both sides and are more bread-like.

As for why they’re different, that requires looking at a little bit of history.

The theory behind the name of the crumpet was that it descended from the 14th century crompid cake, which itself was derived from the Germanic verb crumpen, meaning to curl up. (There’s a similar Gaelic term, so there could be a common indo-European root.) The significance is that the crompid cakes probably curled because they were unleavened, flat griddle cakes.

If crumpets were popularized from the top down, English-style muffins (I’ll explain soon) went from the bottom up. The original English muffins were leftover scraps of dough that house servants cooked on a griddle to eat as part of their own meals in the late 17th century onward. By the 18th century, they popular with the gentry, and by the Victorian era, bakeries were turning out muffins daily. These were made with flour, yeast, and ultimately baking soda, then baking powder, and sold door-to-door by muffin men. (As in, “Do You Know The Muffin Man?” Muffin Men.)

And neither the crumpet or the muffin is the English muffin we’re familiar with in American grocery stores. Those are the creation of an Englishman who moved to New York City in the late 19th century, Samuel Bath Thomas. He created product raised by yeast and steam that he called a “toaster crumpet,” probably because, when split, the nooks and crannies on the inside resembled the irregular top of crumpets.

Yesterdish suggestion: If you want a traditional crumpet, cook 4-5 minutes on the first side and then a minute or so on the second side, till toasted. If you want something with two exterior crusts you can stuff, the recipe above is good to go.