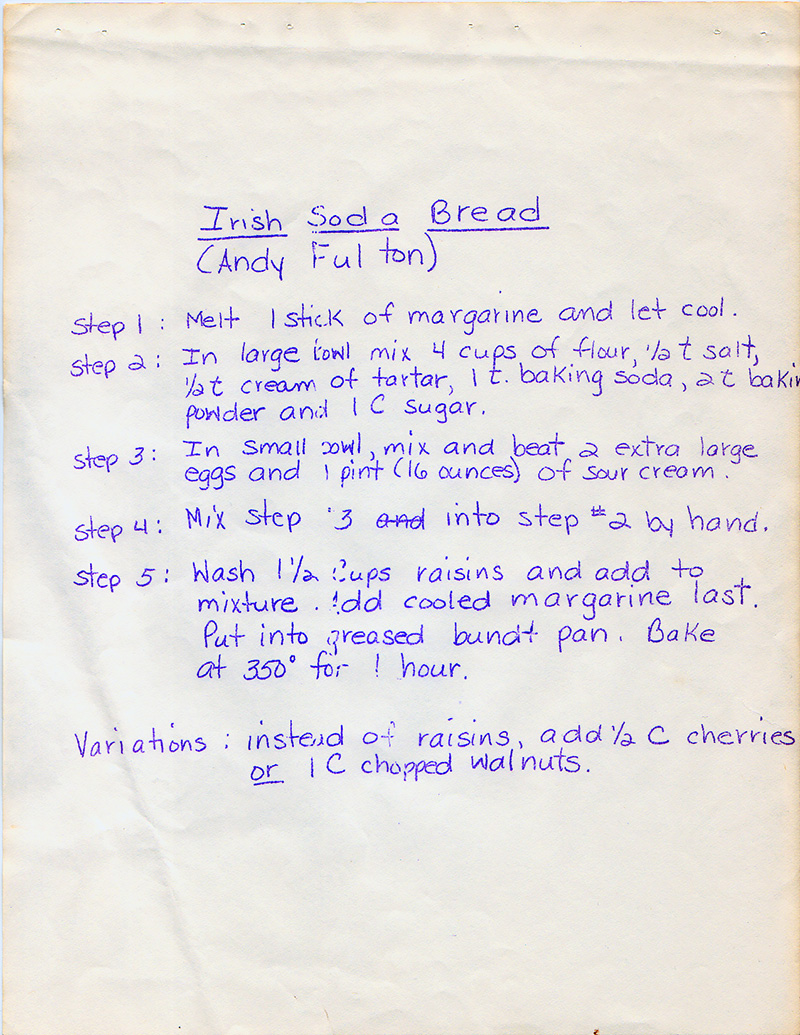 Sort of Irish and sort of Native American.

While soda breads started to proliferate in Ireland shortly after the arrival of baking soda in the early 19th century, they were typically very simple, using only soda, wheat flour, salt, and sour milk or buttermilk. Their popularity was partially due to the soft wheat in Ireland complicating the processes of making yeast breads and the relative absence of ovens in homes.

In the North, the dough would be turned into farl (from the Gaelic fardel, meaning a fourth) by being flattened, marked with a cross, and cooked on a griddle. In the South, it would still be marked with a cross, then baked in a large iron pot placed in coals, producing something that looked a bit more like the loaves we identify.

Neither iteration would generally be sweet or include butter in the ingredients, although it would be added to the hot bread before eating.

An 1824 recipe in The Virginia House-Wife by Mary Randolph appears closer to what we think of as Irish soda bread than actual soda breads made by the Irish:

The American tradition of soda breads actually goes back to native tribes making corn cakes with potash–cakes that are naturally sweeter. Of the three waves of Irish immigration, two predate baking soda and one is after 1824, suggesting that Mary Randolph’s iteration has a different origin.

potash
Potassium bicarbonate or potassium carbonate. The bicarbonate is a leavening agent that is usually indistinguishable from sodium bicarbonate--baking soda--in the finished product. Use baking soda, although places that sell home brewing equipment often have the bicarbonate, if you absolutely must have potash.
sour milk
Milk that has either started to turn or has fully turned sour (as in, expired). Imparts a tangy flavor to the end product in baked goods. Substitute buttermilk if you find you can't bring yourself to intentionally use sour milk.