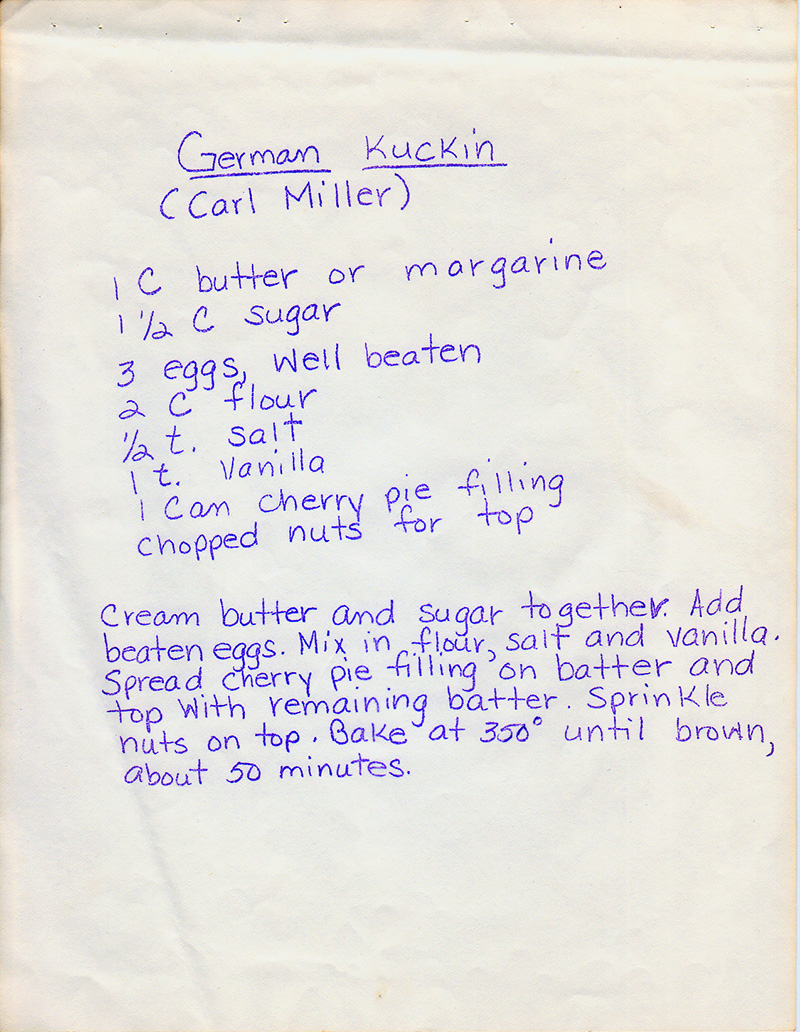 Kuchen is the German word for cake and applies to a wide variety of cakes, including cheesecakes (made with the German cheese Quark) and butterkuchen, a variety where flakes of butter are distributed throughout the dough, creating delicious holes in the final baked product. But generally speaking, when someone in the U.S. mentions a kuchen, they’re talking about a coffee cake.

This has something to do with Germany’s odd relationship to coffee. Coffee first came to Europe when Turks fleeing occupied Vienna in 1529 left behind bags of coffee, but coffee didn’t proliferate in Europe until a less dramatic Turkish invasion–two servants of a merchant who quit their master’s employ to make a coffee house in London in 1652.

From there, coffee traveled to Italy and France, and finally in 1673, Germany had a coffee house of its own. While women were generally allowed in German coffee houses, the habit was considered a vice, and vice in general was thought to be a masculine undertaking at the time. In the early 18th century, Bach wrote the cantata “Schweigt Stille, Plaudert Nicht,” (“Be Still, Stop Chattering”), a story of a father trying to break his daughter’s habit of coffee-drinking to find her a husband. (It includes a love song–sung by the daughter to her coffee.)

To enjoy coffee in a non-judgmental atmosphere, 19th century German women started to gather together and organize kaffeekränzchen, or coffee parties. (Ultimately the word kaffeeklatsch would be coined to describe gender-neutral meetings like this, combining the words for coffee and gossip., but that wasn’t until decades later). From these gatherings, the German tradition of a 3 PM coffee and cake break began, and it’s still observed to this day, although not quite as religiously. It’s a bit like Brits and their tea, really.

The odd part? Germany is the second biggest exporter of coffee in the world, behind Brazil. Which is strange, given that coffee doesn’t grow in Germany. It makes sense when you think about roasting coffee as a technological accomplishment.

German immigrants brought the kuchen to the U.S.; consider this advertisement from the October 1, 1897 edition of The (Richmond, Virginia) Jewish South: