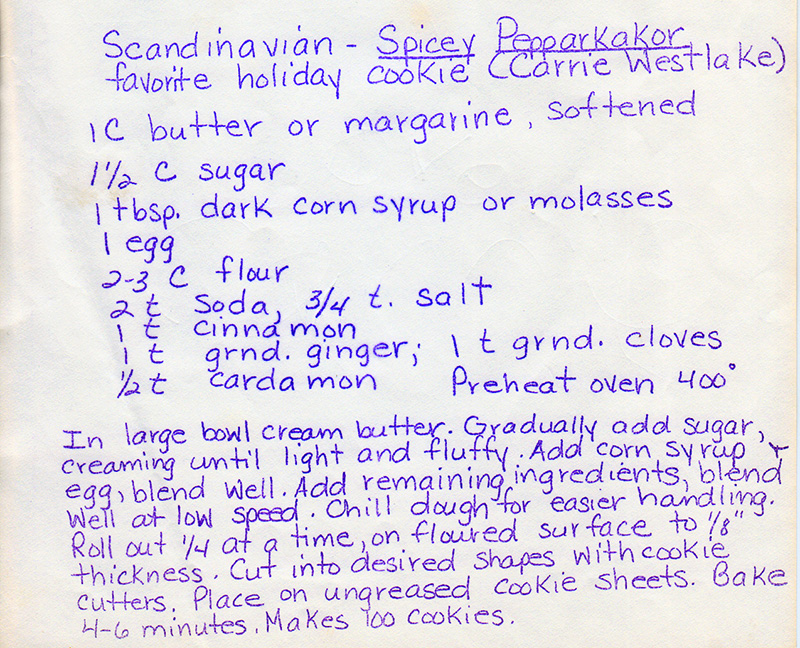 The history of pepparkakor starts sometime in the 13th century, when German immigrants brought to Sweden the type of gingerbread they enjoyed at the time. The name pepparkakor translates literally to “pepper cake,” and the earliest baked goods to carry that name were something like that.

They were sweetened with honey, softer, and intended to serve as a digestive aid. The spices used would change, but would usually include pepper, as well as cinnamon, clove, nutmeg, mace, anise, and whatever else might have been available. By the 15th century, nuns in Vadstena would bake a firmer iteration of the product, pressing under wood blocks to make thin canvases for decoration that more closely resembled the modern cookies. By this time, the spices that might be used had expanded to include citrus, cedar oil, and pomegranate.

Although it doesn’t use the name, this recipe for “Swedish cookies” from the March 4, 1909 edition of The Hayti (Missouri) Herald is, indeed, a pepparkakor recipe:

There’s a tradition in Sweden that goes something like this: think of a secret wish. If you hold a pepparkakor in your hand and strike it with the opposing finger (or knuckle, depending on how you think the legend goes), and it breaks into three pieces, then your wish will will come true. (In some iterations, it only comes true if you eat the cookie before saying a word.) If not, well… that’s the way the cookie crumbles.

This legend seems to favor love. Five of the most traditional shapes are a man, a goat, a pig, a horse, and a heart. Guess which shape is most likely to break into three pieces if struck in the center.

Roll out 1/4 at a time on floured surface to 1/8″ thickness. Cut into desired shapes with cookie cutters. Place on ungreased cookie sheets. Bake 4-6 minutes.

potash
Potassium bicarbonate or potassium carbonate. The bicarbonate is a leavening agent that is usually indistinguishable from sodium bicarbonate--baking soda--in the finished product. Use baking soda, although places that sell home brewing equipment often have the bicarbonate, if you absolutely must have potash.