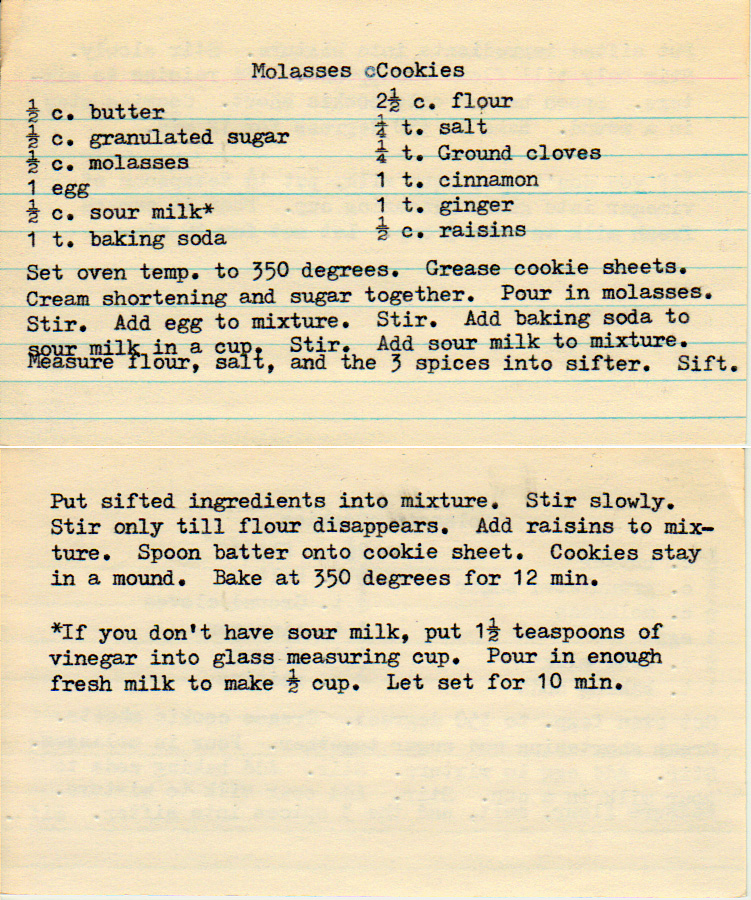 A modern recipe, a little bit different from the 19th century versions.

Compare this recipe for molasses cookies from the July 22, 1873 edition of The Bloomfield (Pennsylvania) Times:

You might notice that it doesn’t specify an amount of flour. I’ve noticed that about quite a few recipes from this time period. For example, here’s another recipe for molasses cookies, and one for sugar cookies, from the January 31, 1880 edition of the Dodge City (Kansas) Times:

So what’s going on? I don’t know for certain, just yet, but I have a theory. Often, cookbooks of the day would tell you to use enough flour to roll the cookies out, as they did in the 1887 recipe compilation Melrose Household Treasure:

Even later cookbooks would sometimes give a baseline amount of flour and then tell you to add to it as necessary. For example, this molasses cookies recipe from the 1917 edition of Culinary Echoes From Dixie by Kate Brew Vaughn:

Until the late 1800s, most flour was stone-ground and wasn’t standardized in any way. Its effect in a recipe would depend on a number of things, including how far apart the stones happen to be set at that mill, the variety of wheat used, and the humidity where it was stored. In the late 1800s, mills started to switch to steel rollers, which provided a much more refined product.

While not knowing how much flour to use in a recipe might feel unusual, if you think about it, we do the same thing all the time with other ingredients. When you make pasta, you have to adjust the flour and water a little each time you make it, because there’s always some variation in the ingredients. (You might well think it would be nice if chickens would lay uniform eggs, but they are disinclined to do so.) When you make potato gnocchi or pumpkin pie from fresh pumpkins, the water content of potatoes and pumpkins varies greatly; you have to just go by instinct, feel, and experience.

From the box of C.C. sold in Ceres, California.

*If you don’t have sour milk, put 1-1/2 teaspoons of vinegar into glass measuring cup. Pour in enough fresh milk to make 1/2 cup. Let sit for 10 minutes.

saleratus
Baking soda. Traditionally, either sodium bicarbonate (what we use today) or potassium bicarbonate. From the Latin words sal, meaning salt, and aeratus, mening aerated.
sour milk
Milk that has either started to turn or has fully turned sour (as in, expired). Imparts a tangy flavor to the end product in baked goods. Substitute buttermilk if you find you can't bring yourself to intentionally use sour milk.