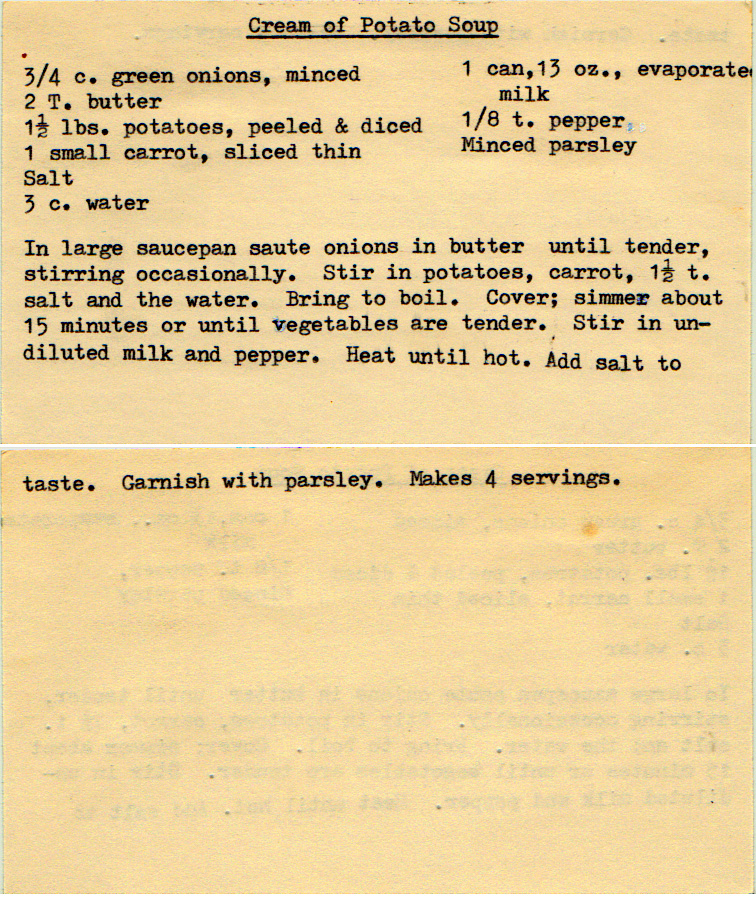 And a look at the family tree of potato soups. We’d talked about the history of the potato on the baked potatoes post from University Heights, Ohio, remember? In that post, we mentioned potage Parmentier, the soup named after the man who popularized the potato in France.

Potage Parmentier is a cream of potato and leek soup. If you add young carrots to the vegetables, you make potage bonne femme. It was a childhood favorite of Louis Diat, born in 1885 in Bourbon-l’Archambault, France, and part of what inspired him to become a chef.

Eventually, Diat would work at the Ritz in London in 1906, and then move to New York, briefly at the Carlton House and then the new Ritz-Carlton. In 1917, he started to serve a soup based on what his grandmother used to do with leftover potage bonne femme: eat it cold, with more cold milk added.

Whether he invented the recipe or tweaked an existing recipe is a philosophical question. But either way, he named his cream-enriched version crème vichyssoise glacée, which translates to something along the lines of “chilled cream in the style of Vichy.” At the time, Vichy was famous for its cuisine (the name itself was derived from a Roman named Vippius who had used it as farmland in the first century B.C.) and its thermal baths; it’s the kind of place you might have a cooling soup, just as you would in a sultry New York summer.

Ultimately, of course, Vichy became more famous as the seat of the collaborationist French government during World War II. While none of Diat’s children would go on to work as a chef, his nephew did, until the war; then, he joined the French resistance, and was killed by German soldiers

In a large saucepan saute onions in butter until tender, stirring occasionally. Stir in potatoes, carrot, 1-1/2 t. salt and the water. Bring to boil. Cover; simmer about 15 minutes or until vegetables are tender. Stir in undiluted milk and pepper. Heat until hot. Add salt to taste. Garnish with parsley. Makes 4 servings.