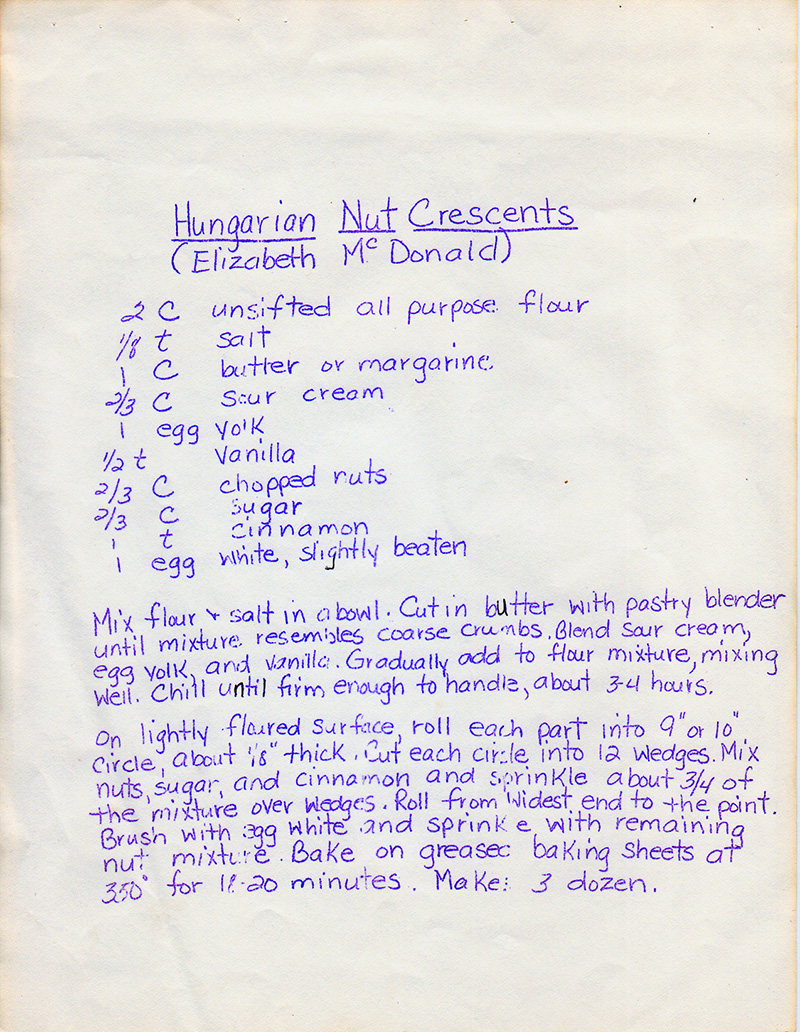 I’ve seen the name of these cookies transliterated from the 44-letter Hungarian alphabet (look it up) as kifli, kiflie, and kiffle. (I’m guessing it shares a root with kipferl, the German word that describes the shape of croissants.) English-speakers have also offered the identities “nut horns” and “walnut rolls.”

At any rate, the legendary origin of kifli is that, in 1686, bakers in Budapest who were awake at night heard Ottoman Turks tunneling under the city walls sounded the alarm, allowing Budapest to repel the invasion. In honor of the victory, they baked cookies in the shape of the crescent on the Ottoman flag.

There are all kinds of reasons why this isn’t true. The primary one is that, in 1686, the Turks had held Budapest for two years, and it was the Holy Roman Empire that was attacking (and it won on its second attempt, and then performed massacres that would probably not have put anyone in the mood to bake). So there wasn’t much to celebrate. Another reason is that the same origin is attributed to croissants, except it’s 1683 and Vienna (where, at least, the Turks actually were trying to invade).

But the primary reason these stories are bogus is that these cookies are almost certainly of Ottoman origin. There are many nut-filled sweets that could be cousins in Turkish cooking, and besides, why would you make a cookie shaped like your opponent’s flag after you win? “Welcome home from Germany, honey! Look what the kids and I made you: swastikookies!”

For what it’s worth, I do have a World War II-era story about Hungarian cookies that might well be true. From the March 21, 1942 edition of the Pittsburgh Post-Gazette, in The Lyons Den column by Leonard Lyons:

Faragoh had been born in Budapest and was educated in New York City. In the 1930s, he wrote a handful of classic movies, including Little Caesar for Warner Brothers and the adaptation of Frankenstein for Universal. After his train ride, he’d go on to do the adaptation of My Friend Flicka for Fox, among other films.

On lightly floured surface, roll each part into 9″ or 10″ circle, about 1/8″ thick. Cut each circle into 12 wedges. Mix nuts, sugar, and cinnamon and sprinkle about 3/4 of the mixture over wedges. Roll from widest end to the point.

Brush with egg white and sprinkle with remaining nut mixture. Bake on greased baking sheets at 350 deg. for 18-20 minutes.