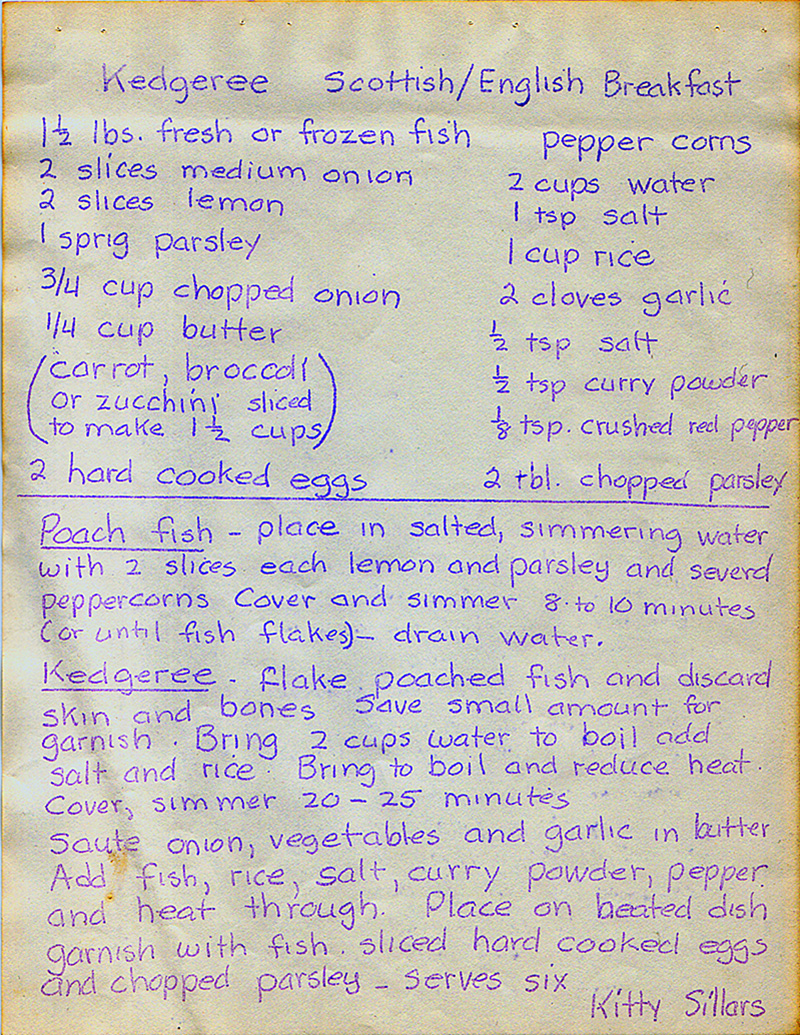 A favorite in England, Scotland, and Washington, D.C.

Kedgeree is an Anglo-Indian dish that consists of flaked fish (either smoked, poached, or leftover), boiled basmati rice, hard-cooked eggs, curry powder, and some amount of vegetables.

The exact origin is in some dispute. The most commonly accepted explanation is that a 14th-century Indian dish of mung beans and rice was brought back to the U.K. and evolved to include leftover fish during the Victorian era, when refrigeration was not available. However, some Scots point to an 18th century Scottish origin, theorizing that the dish was carried to India and then made its way back to the rest of the Empire during the British Raj.

Like any other dish that represents two cultures shuffled together, the truth is both indecipherable and largely irrelevant to the merits of the dish. More interesting is that it was served in the White House in the 1930s.

Evidently, Eleanor Roosevelt was a fan. Consider this item from the June 11, 1936 edition of the Rochester Journal:

(Why Southern? I have no idea, although many Scots settled in North Carolina.)

Eleanor Roosevelt had submitted a slightly different iteration to The Congressional Cook Book in 1933:

Eleanor Roosevelt mentioned learning the dish from her Mother-in-Law, Sara Ann Delano Roosevelt. While the Delano name is of French origin and Sara was born in New York, her mother’s was Catherine Lyman, born Catherine Robbins. Robbins is a name of Scottish origin and Lyman is a name of English origin, suggesting that Eleanor inherited this dish through the women of her husband’s family.

Although still missing curry, there’s another, closer-to-authentic candidate for how F.D.R. took his kedgeree. In her memoir White House Diary, F.D.R.’s secretary Henrietta Nesbitt offers a third recipe and anecdote:

For context, Nesbitt had served a terrapin soup and F.D.R. insisted it could only be a stew, with cream and butter.

Poach fish — place in salted, simmering water with 2 slices each lemon and parsley and several peppercorns. Cover and simmer 8 to 10 minutes (or until fish flakes) — drain water.