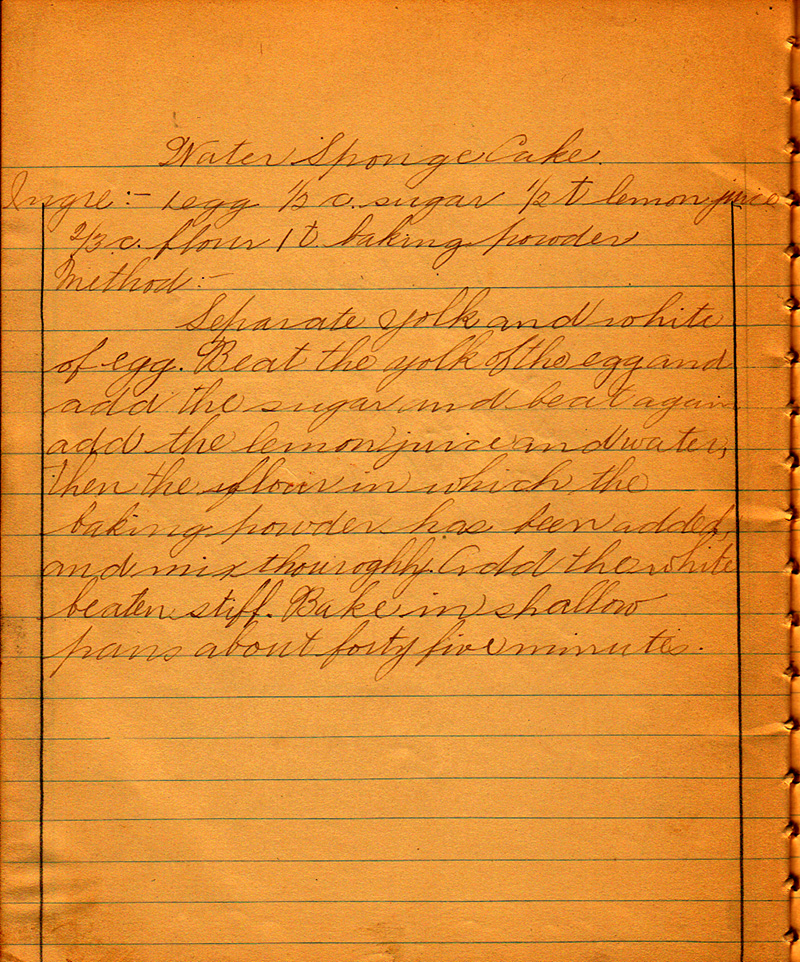 Guess which ingredient she forgot to include?

Beat yolks of eggs until thick and lemon-colored, add one-half the sugar gradually, and continue beating; then add water, remaining sugar, lemon extract, whites of eggs beaten until stiff, and flour mixed and sifted with baking powder and salt. Bake twenty-five minutes in a moderate oven in a buttered and floured shallow pan.

So why water? Well, remember that this is a notebook from a student learning homemaking in 1915? Here’s a snippet from 1915’s The Science of Home Making: A Textbook in Home Economics:

Around 1915, four eggs cost a little over eleven cents. Judging by ads around those days, for about the same price, you could get two-thirds of a pound of baking powder.

Now, a pound of baking powder would be around two cups in volume. So two-thirds of a pound would be one and one-third cups, or 64 teaspoons.

So to answer the original question, four eggs cost about 11 cents, and a teaspoon and a half of baking powder cost about a quarter of a single cent. Or, to look at it another way, for the cost of the four eggs, you would have enough baking powder to make 42 full cakes with a teaspoon left over.

Adjusted for inflation, the 1915 numbers are that four eggs cost the equivalent of $2.53 in 2012 dollars, while a teaspoon and a half of baking powder cost six cents in 2012 dollars.

Even though the price of eggs has come down, it’s still a substantially cheaper recipe. Four eggs cost about eighty cents, at least. Meanwhile, assuming a .79, half-cup size (converting from weight) container of baking powder, a teaspoon and a half of baking powder costs… a little over eleven cents.

Separate yolk and white of egg. Beat the yolk of the egg and add the sugar and beat again. Add the lemon juice and water, then the flour in which the baking powder has been added, and mix thoroughly.