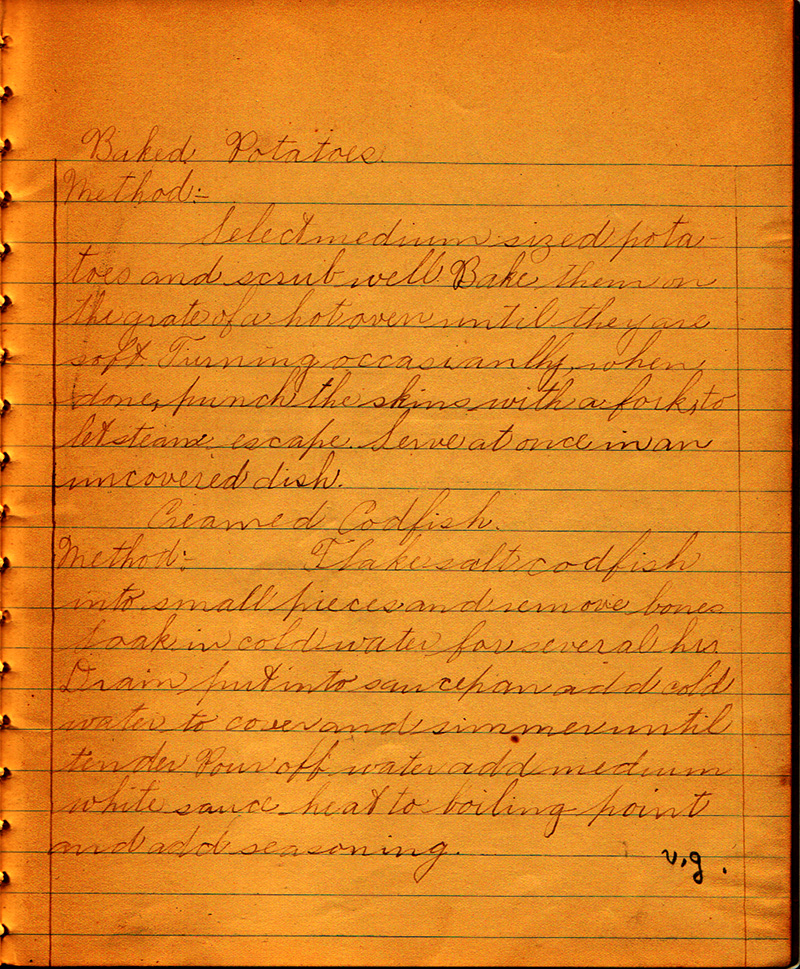 Enjoyed by the heirs of Vikings and Patriots alike.

We talked about curing fish with salt in our gravlax post. Salt cod goes beyond that, combining salt, heat, and air to dry the fish out completely. Before cooking, the fish is soaked for hours (or days, under refrigeration) to remove salt and rehydrate the fish. The flavor is ultimately a bit sweeter, and the texture slightly chewier, than regular cod.

Dried and salted cod is common to many cuisines, including Italian, Greek, Spanish, Caribbean, Dutch, East African, and, of course, American; but the earliest references come from our Scandinavian friends around the end of the 14th and start of the 15th century, when Norwegian traders started to export their klippfisk.

In the United States, the New England states have always dried and salted a smaller species of fish they call rock cod (which isn’t actually a cod, but does have a substantially similar flavor and texture). During the time this particular recipe notebook was written, it was enjoying a bump in popularity.

Because it was tasty. Also, because it didn’t come in a tin.

By 1918, over half the United States’ canning capacity was being occupied by government contracts to produce supplies for soldiers and allies. Among the things placed in cans were pork and beans, hardtack biscuits, meat products (especially corned beef), salmon, sardines, condensed milk, and butter.

The need for military canning capacity was not only motivated by fear of spoilage. Chemical warfare was common during World War I and the gas attacks could taint food supplies. At the time, canning was the safest way to ensure food was airtight and impact-resistant. After the war, the excess canning capacity led to a boom in shelf-available foods, like the canned bean sprouts that started the La Choy brand in 1922 (which we talked about in the Tuna Crunch Salad post).

But that’s another story. The point is, the dip in the availability of commercially canned products to civillians meant those who didn’t have the resources to can their own products had to resort to other self-stable foods, leading to a bump in popularity for the old favorite, salt cod. Just like any good Viking or Patriot would eat.

Select medium-sized potatoes and scrub well. Bake them on the grate of a hot oven until they are soft, turning occasionally. When done, punch the skinswith a fork to let steam escape. Serve at once in an uncovered dish.