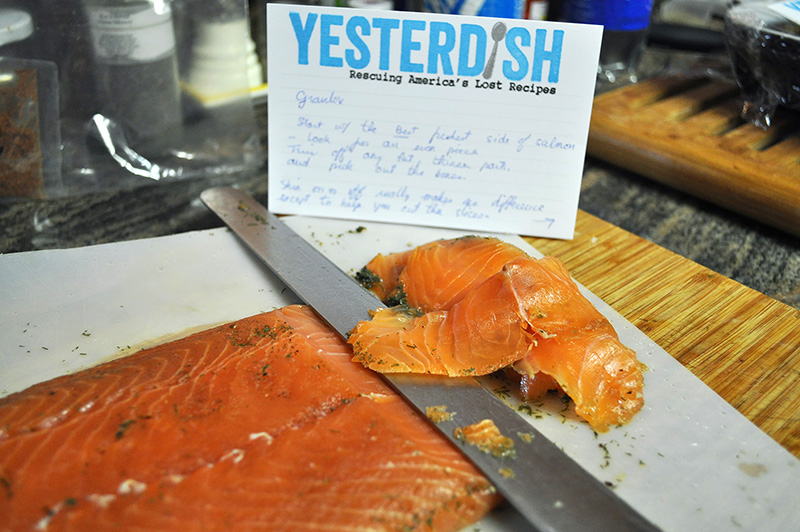 The Finns do it. The Swedes do it. Even 3000 B.C. Sumerians, 2nd-century B.C. Romans, and 16th-century Algonquin Indians do it. Although these days, we primarily think of the Finns and Swedes doing it this way.

That was a bit more musical in my head. But the point is, curing fish with salt and sugar is one of the earliest forms of food preservation known to recorded history, and almost every culture with a coastline has a variation on the theme.

Gravlax is the Scandinavian term for non-smoked cured salmon, usually cured with a combination of sugar, salt, dill, and other ingredients, which can include liquor, peppercorns of various colors, and other herbs and spices (for example, juniper, cilantro, caraway, or paprika). The proportions of salt and sugar vary with tastes; obviously, I grew up with a blend that favors salty over sweet. Gravlax and lox are related, but different. They both come from the Indo-Eurasian word laks, meaning salmon. Lox is prepared by salt-curing and cold-smoking the fish (that is, smoking very slowly over a low temperature for a long period, frequently days). It’s good, but that’s another recipe, and we’ll talk about lox in depth another time, I promise.

The root grav, on the other hand, was tacked on by the Scandinavians, and means grave. The traditional method of making gravlax was to salt the fish and bury it for days, which made sense, in the days before refrigeration. Modern cooks replicate that process by putting pressure on the fish (to encourage the leeching of water) and putting it in the (much safer than dirt) refrigerator.

While these differences of preparation may seem subtle to you, I assure you, they make all the difference in the world. Lox is assertive, with a balance of salt and smoke, and a slightly firmer texture; it’s soft, but it’s still basically cooked. Gravlax has more of the natural taste of the salmon and has a texture so supple that it can be similar to raw, non-cured salmon. To understand why packing salmon with salt and sugar and weighing it helps slow spoilage and avoid dangerous bacteria from reproducing requires a brief review of high school chemistry and biology. I’ll try to keep it brief, because who wants to talk about this stuff in on a food blog?!

Ordinarily, spoilage and disease microbes land on the surface of food and multiply. But like all life on earth, microbes require water to survive. In curing, salt and/or sugar draw water out of the flesh via osmosis, dehydrating the surface layer, which has the effect of inhibiting the growth of new microbes and of actually potentially killing any microbes that are there. If someone sucked out 40% of your water, you’d die just the same as they do.

So knowing the science that will keep your gravlax edible should give you peace of mind to attempt it. And if you’re not a science-minded sort, take comfort in the fact that since 3,000 B.C., cultures the world over have used this same method to feed their civilizations with great success. After all, you don’t see any ancient Sumerians complaining, do you?

Start with the best, freshest side of salmon. Look for an even piece. Trim off any fat, thinner parts, and pick out the bones.

Skin on or off really makes no difference except to help you cut thin slices.

I have been doing this for so long, I measure nothing. But here are actual measurements for the newbies.

Toast your peppercorn–crush and mix with salt and sugar. Put 2/3 cup of chopped dill and 1/3 of the salt/sugar/pepper mix into the bottom of a glass dish 8 x 8 x 2″. (I just bag it in a vacuum bag.)

Put the rest of the seasonings on the other side of the salmon. If you left the skin on, place the salmon skin side down–cover with plastic–add heavy weights. Refrigerate 2-3 days. Then scrape everything off [rinsing is fine, too]–slice–EAT.