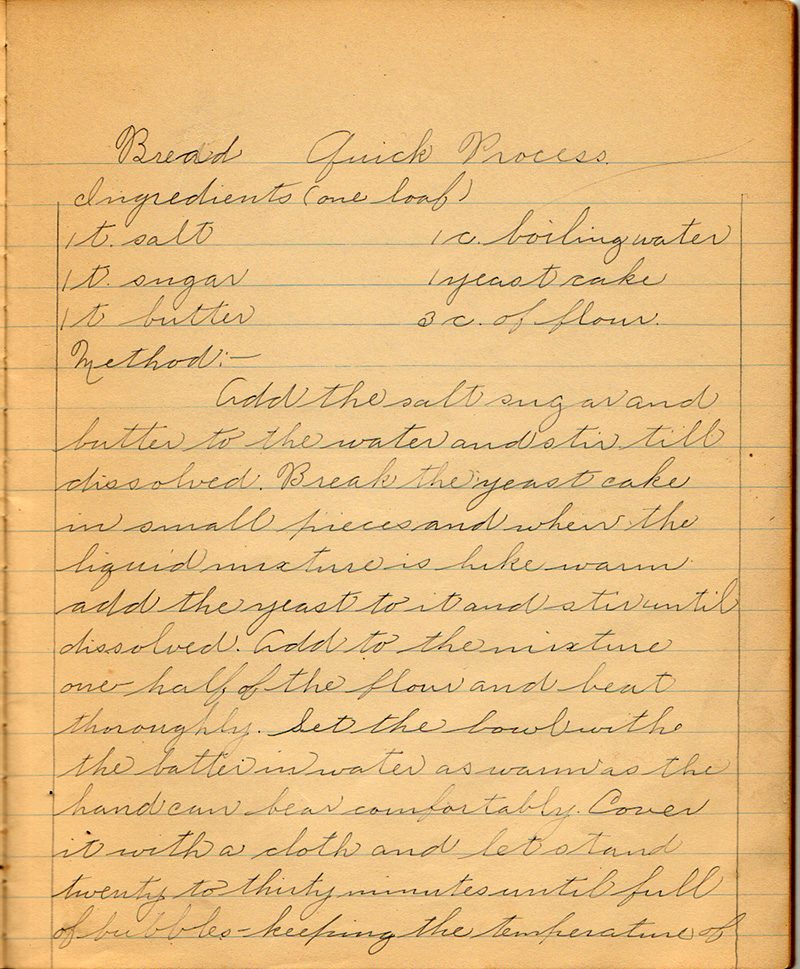 A yeast bread with a very short rising time. I would suggest giving an even longer rise, personally–45 to 60 minutes per rise. If you don’t have the time, would you be making bread to begin with?

To understand the difference between slow rises and quick rises and the quantities of yeast involved, you need to understand a little bit about yeast. Yeast is, basically, a fungus that eats sugars and converts them into carbon dioxide and alcohol. The starches in flour are themselves composed of sugars. So the big picture idea is to get the yeast to eat some of the sugars in the starches (broken down by kneading) and release carbon dioxide, inflating the starches (and stretchy gluten) of the dough.

But within that big picture are some complexities. Healthy yeast has a lifespan that’s measured in hours, and the yeast you get in the store–dehydrated to 8% water to make it dormant and temperature-tolerant–is not exactly the healthiest yeast in the world. Yeast also reproduces very quickly, by budding. So many recipes call for using very small amounts of yeast with a very long rise, with the initial yeast intended to be the great-great-great-grandparents of the yeast that’ll be present when you ultimately bake the bread.

The positive aspect of such a rise is that the continued development of yeast (and breakdown of starches) helps create breads with more complex, pronounced flavors that taste less like the original yeast put in the dough. There are some down sides as well, however. Unless this rise happens under cover and refrigeration, there are ambient yeasts and bacteria that could find their way into the bread; while not dangerous to the final product, they can change the taste substantially. There’s also the problem that once you rehydrate yeast, they’re much easier to kill. Too much sugar can actually kill yeast by dehydrating them. The temperature in dough will change as it rises, and yeast that gets too cold could go dormant or die.

This isn’t to say it isn’t fantastic bread; just that requires some amount of care. Believe it or not, an air-filled garbage bag sealed around the dough helps create a controlled environment that can help the long rise go well.

Meanwhile, bread with a lot of yeast (like my pizza dough) will tend to rise comparatively quickly, and you’ll end up baking it with most of the yeast in the bread being what you added, rather than what reproduced in the dough. The bread will have a strong taste of the yeast (how a yeast smells dry is how it tastes when baked in bread, generally).

Generally speaking, people like the taste of yeast in homemade breads–that’s why the yeast producers chose and cultivated these strains, after all. If you’re making a bread with refined white flour and water, you absolutely want the bread to taste like yeast, because there’s not a whole lot of other things with flavors you want to enjoy in the bread. But if you’re making a rye bread, for example, or a flax bread, or a whole wheat, or a white bread made with beer, or any other bread where you want the yeast flavor to take a back seat, a slow rise is generally preferable.

As a footnote, potato breads are so popular because potatoes are entirely available starches, so yeast loves them. If you want to make a sourdough starter from scraps, potato peels are excellent yeast food.

Yesterdish suggestions: Because of the long baking time, I wouldn’t use an oven hotter than 400 degrees. You should also consider 450 degrees for about 35 minutes as an alternative. Also, as stated above, I’d extend each rise to 45 minutes at least.