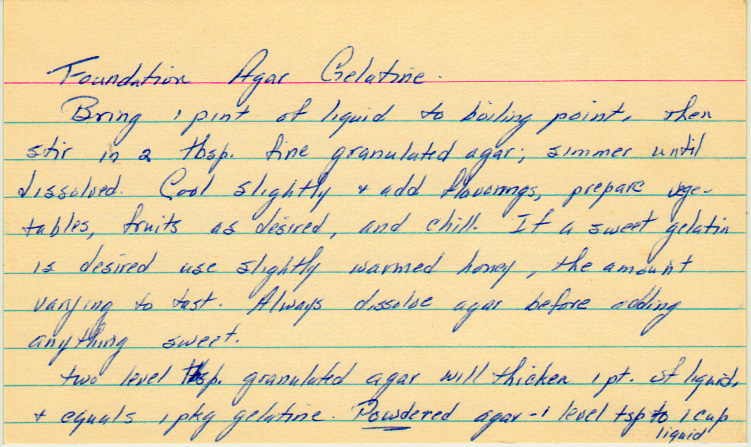 This vegan gelatin substitute can help with diets. Although we discussed agar’s origin briefly in the soy vanilla ice cream recipe, we didn’t really cover some of its culinary uses.

A few interesting culinary quirks of agar: because it sets firmer and faster than gelatin, and at well above room temperature (122 degrees Fahrenheit, actually), using agar instead of gelatin can produce molds that will hold up to a fair bit of heat, where gelatin would melt.

And if you remember, I mentioned in that ice cream post that before agar is heated, the carbohydrates that form its structure absorb water? Granulated agar can be a diet aid–it swells to three times its volume and makes you feel full with very few calories. (Its structure is about 80% dietary fiber, so if you go this route, you might want to cut back your Raisin Bran a little.)

Powdered agar is a 1:1 substitute for gelatin, while granulated agar requires three times the amount (as the recipe here notes).

If a sweet gelatin is desired use slightly warmed honey, the amount varying to taste. Always dissolve agar before adding anything sweet.