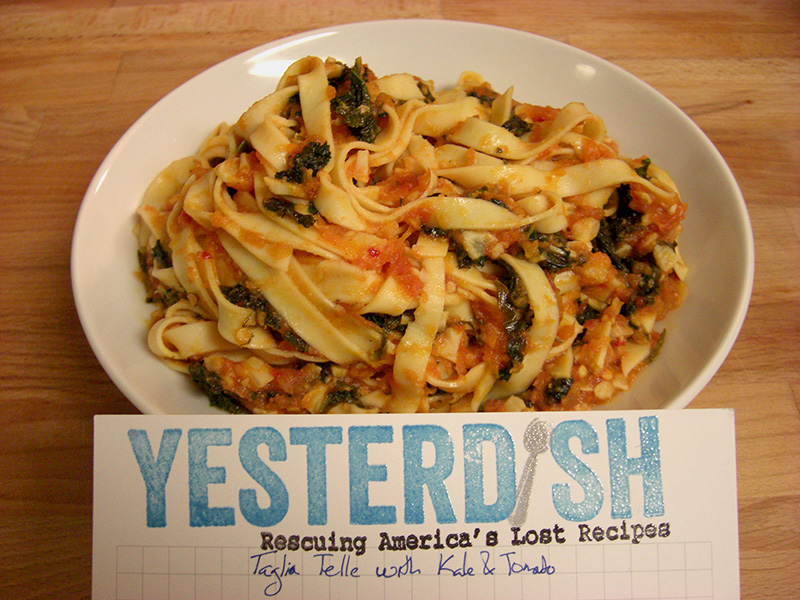 Well, you want to try that tomato sauce you just made, don’t you? I know I do. Once the sauce is made, this is an extremely simple recipe. If you make the sauce on a weekend, this is a very good weeknight meal, assuming you’ve got your pasta dough technique down.

(If you aren’t yet making your own pasta at times, I’ll say this: if you try and something goes awry, but you have a box of spaghetti handy, you won’t go hungry. The sauce will go just as well with either.)

When I sit down in front of a plate of tagliatelle, the world quiets around me, and from the first fork to the last, I’m calm and content and even, at times, happy. But tagliatelle is something special. It’s a fresh (that is, egg) pasta from Emilia-Romagna that’s cut to be 6 millimeters, or about a quarter-inch, wide. A lot of people are confused about the difference fettuccine and tagliatelle. The short version is that, in Italy, that tagliatelle is generally slightly wider, but there’s some overlap in the acceptable width range. In the U.S., that distinction has not been maintained as cleanly.

(Wikipedia, as usual, actually has the distinction wrong. They cite Ada Boni’s 1983 edition of La Cucina Romana as saying fettuccine is slightly wider. Well, Ada Boni was long dead at that point, and didn’t edit her own writing when she was alive. Many of the recipes in later editions were inserted by editors. I have her 1969 book on regional Italian cooking, and her recipes for fettuccine and tagliatelle both say to cut them half an inch wide, a measurement she wouldn’t even have used. So either the pasta changed shape or we need to recognize her books are insufficient authority for things like pasta varieties.) The reason for the confusion is that even in Italy, where talking about pasta is really talking about somebody’s grandmother, the distinction we’re talking about is somewhere around one millimeter. And we could go on and on about this for hours, but it’s not really the point. It’s my recipe, and it’s tagliatelle.

Nobody could eat pasta like my grandfather. He ate it every day; if it wasn’t part of dinner, then dinner wasn’t over. And not just regular dinners, either; I distinctly remember more than one Thanksgiving lasagna joining the full turkey dinner. (I think I remember there was also a spiral-cut ham there, because clearly, a full Thanksgiving dinner and a lasagna aren’t enough. For the record, there were eight of us at these dinners. Two of us were children. The lasagna alone served about twenty-four.) I never complained, and even started to understand, as I got older. When I sit down in front of a plate of tagliatelle, the world quiets around me, and from the first fork to the last, I’m calm and content and even, at times, happy.

Which is pretty impressive, for flour, egg, kale and tomato.

Yesterdish’s Tagliatelle with Kale and Tomato