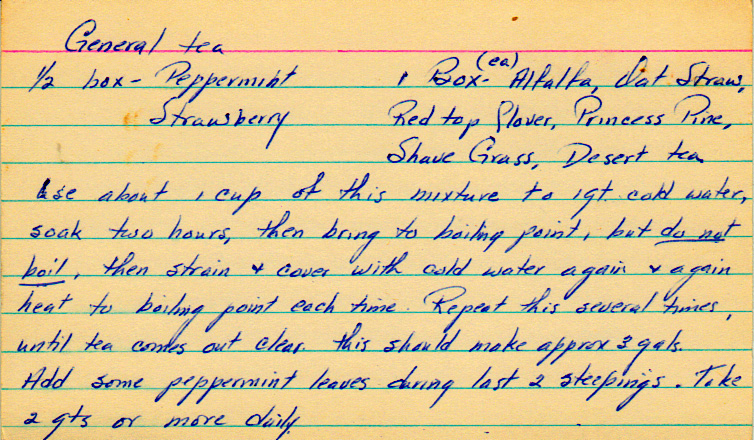 “Bring to boiling point, but do not boil.” Wow, zen. What’s the sound of one pot simmering?

A brief review of the odd things in this tea…

Alfalfa (medicago sativa) is a flowering legume that’s high in minerals and vitamins that folk medicine says is a treatment for arthritis. You’re probably more familiar with alfalfa sprouts at the salad bar, but the tea is made from the leaves.

Red top clover (trifolium pratense) is a wild herb used in folk medicine to increase resistance to disease and to treat ulcers. It sort of makes sense, given that its primary benefit seems to be a high incidence of phytochemicals. That’s just a fancy word meaning chemicals in plants. So in essence, folk medicine says, “take this, it’s full of… stuff… that’s good… for… stuff.”

Shavegrass (equisetum arvense) is a weed that folk medicine prescribes to treat kidney ailments. It’s a diuretic and it’s high in silica, which is thought to make stronger hair, nails and bones.

Princess pine (lycopodium obscurum) is discussed in today’s post about garlic broth, but to avoid having to flip over there: [it] is a variety of fern that looks like a small pine tree. Native Americans used the boiled roots and branches to produce a tea to treat sore throats and runny noses.

Oat straw is straw made from the dried-out stalks of oats. Oat straw is used to treat malnourishment in horses. By feeding them. Because it’s horse food. It’s also sometimes used to make construction materials, rope, paper, shoes, and crafts. I suppose it’s high in soluble fiber, but I don’t know that making tea out of it will accomplish anything other than causing passing-by horses to look in your direction and think, “Oh, that’s the Johnsons’ house again, they never do invite me over for tea.”

Use about 1 cup of this mixture to 1 quart cold water. Soak two hours, then bring to boiling point, but do not boil. Then strain and cover with cold water again and again heat to boiling point each time. Repeat this several times until tea comes out clear. This should make approximately three gallons.