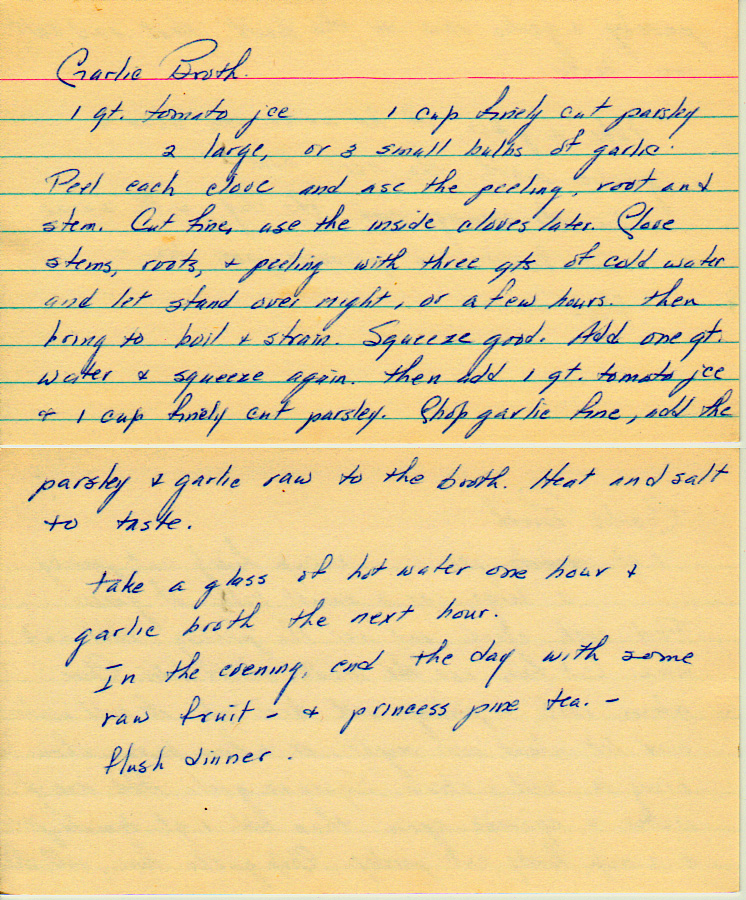 A recipe based mostly on folklore. Garlic has a long tradition of being treated as a cure for things. The trouble is, nobody seems to agree what it cures. In 3200 B.C., Egyptians gave slave laborers garlic to increase their strength. There are two well-recorded slave revolts in early Egyptian history: one was caused by a garlic shortage after the garlic fields flooded, and the other was the Jewish exodus. So in essence, garlic and a command from God himself were of equal importance, if you want to look at it that way.

In 2000 B.C., Chinese medicine prescribed wine in which garlic had been steeped for a month as a treatment for colds, performing a task something along the lines of and internal Vick’s VapoRub, or, if you’re familiar with this Canadian gem, Buckley’s Mixture. It was also used to help digest meat, which makes sense–if it makes your mouth water, it increases enzymes making contact with the meat, which helps you digest it.

Around 400 B.C., Hippocrates prescribed garlic to Greeks who had pneumonia or cancer.

By the first century A.D., his countryman Dioscorides prescribed garlic to treat snakebites, rabies, bronchitis and leprosy. Meanwhile, in Rome, Pilny the Elder wrote that garlic could be a cure for “changes of water and residence,” by which he meant Montezuma’s revenge, except he couldn’t call it that, because it would be another 15 centuries until Cortes killed Montezuma II (because to have a revenge, you needed not only a Montezuma, but a Montezuma who had just cause for vengeance).

In the 17th century, British doctors were prescribing garlic as a treatment for the bubonic plague and smallpox. In the 19th century, Pasteur demonstrated that garlic could kill certain pathogens in direct contact (provided you were willing to eat a few pounds of garlic), and in the 20th century, it was used to treat typhoid fever in Africa. Today, garlic is taken as a supplement for blood pressure.

How much of this actually works, and whether that has anything to do with garlic-spiked, watered-down tomato juice, I have no idea. But culinarily, I can tell you that a garlic and tomato broth is a traditional Italian preparation for clams and scallops, so consider taking this inspiration and having seafood instead. You know, to treat your case of leprosy.

I would guess, however, that this is intended to treat a cold, given the inclusion of princess pine tea. The princess pine, or lycopodium obscurum, is a variety of fern that looks like a small pine tree. Native Americans used the boiled roots and branches to produce a tea to treat sore throats and runny noses.

Peel each clove and use the peeling root and stem. Cut fine, use the inside cloves later. Clove stems, roots, and peeling with three quarts of cold water and let stand overnight, or a few hours, then bring to boil and strain. Squeeze good.

Chop garlic fine; add the parsley and garlic, raw, to the broth. Heat and salt to taste.

Take a glass of hot water one hour and garlic broth the next hour.

In the evening, end the day with some raw fruit and princess pine tea–flush dinner.