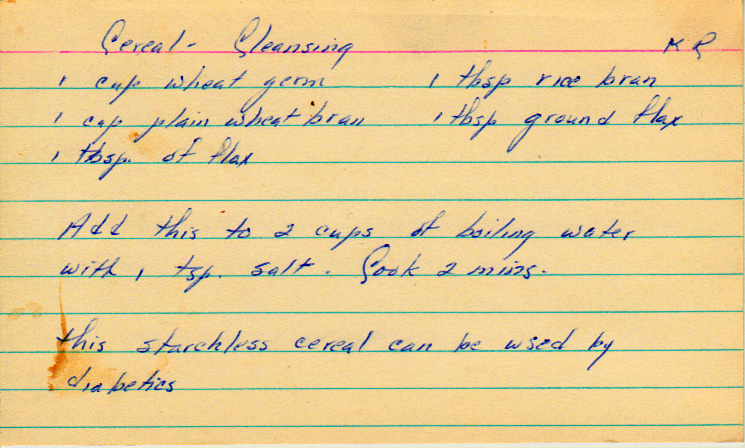 A 1960s recipe using an ingredient that might have decorated the kitchen.

Flax is a plant that was widely cultivated for its fiber, even in ancient Egypt. Until the 1800s, it was the primary American source of cloth and linen paper. Ultimately it was overtaken by cotton, no doubt partially due to the late 19th century invention of the cotton gin. Until after World War II, linen was not only processed by hand, but harvested by hand, with the plants being manually uprooted to ensure the full benefit was realized.

The edible part of flax plants, however, are the seeds, sometimes called linseeds, a reference to the use of the plant to grow fiber for linen. They’re a bit spicy, and my mother makes a North African dip from them by grinding them in a food processor. The seeds can also be pressed to produce linseed oil, which in an edible cooking oil with a pronounced flavor. It’s also an ingredient in paint and varnish.

In 1855, an Englishman named Frederick Walton noticed that some paint containing linseed oil had dried on the side of the can to a flexible texture. He suspected this could be used as a substitute for expensive tree-based rubber and ultimately created a substance he named by mashing together the words “linseed” and “oleo.” Thus, linoleum was born. Linoleum became a popular flooring until the late 1960s and early 1970s, when it was replaced by vinyl, which is cheaper. But it has never gone away, and in fact, is starting to make a comeback. High-quality linoleum has the color running all the way through it, so wear doesn’t show as easily; it’s hypo-allergenic, unlike vinyl; and it stands up to environments where ceramic tile would crack, either from temperature changes, physical impact, or shifting of the building in earthquakes.

Again, don’t believe it when this says “starchless.” Just like the building cereal recipe, this contains plenty of starch and gluten, though it might be low on the glycemic index.

Add this to 2 cups of boiling water with 1 tsp. salt. Cook 2 minutes.

This starchless cereal can be used by diabetics.