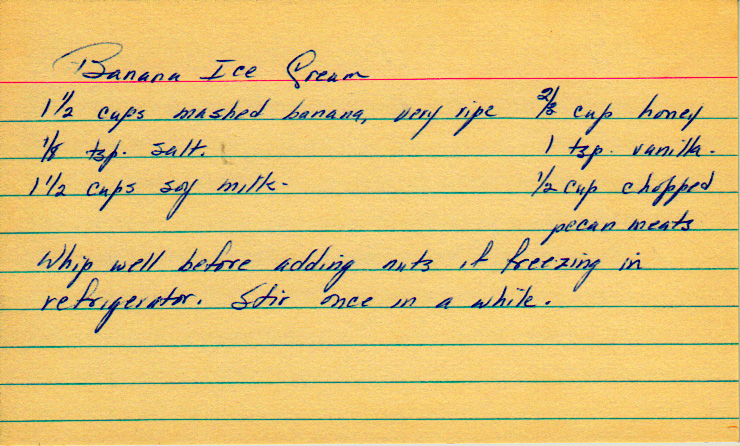 A vegan version made from the most popular fruit in America. At least, by weight.

Your average American eats over 26 pounds of bananas every year, something that probably puts a scowl on Johnny Appleseed’s face, though apples rank second, at just under 17 pounds per year. But we’ll see how popular they are when the taste changes again, which it probably will. We’re likely switching varieties.

Prior to 1960, the most common kind of banana was the Gros Michel, a banana with a slightly rounder shape, softer ripe texture, and a mild taste. But in the 1950s, banana crops were devastated by a fungus called Panama disease. The plants withered at the root, and Panama disease couldn’t be controlled chemically. Finally, banana producers switched production to a more disease-resistant variety of banana, the Cavendish; and 95% of the bananas sold in the U.S., including the famous Chiquita banana, are Cavendish bananas.

Which would be fine, except there’s a new strain of Panama disease that’s attacking Cavendish bananas, now. So producers are looking to switch to another variety, one that’s resistant to this strain of fungus. The good news is that there are lots of varieties of bananas, and as we’ve learned from all other living things, a more diverse gene pool has a better chance to survive biological threats.

The other news (which is either only slightly bad or very good, depending on how you look at it) is that, just as heirloom tomatoes have a wide variety of flavors and textures, banana varieties don’t have the same taste or texture. A lot of people are betting that most producers will return to the Gros Michel, but there’s a substantial indication that producers are looking to stop this merry-go-round of crop rotation by providing wider variety all the time.

Whip well before adding nuts if freezing in refrigerator. Stir once in a while.