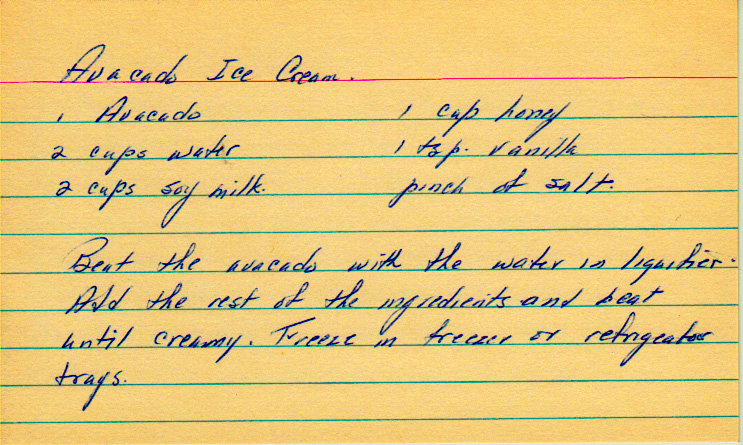 A vegan iteration of a classic.

There was a time when avocados were particularly exotic ingredients in some places. Jacques Pepin’s autobiography tells a story of his first encounter with poire avocat, or “avocado pear,” when he bit into it expecting a pear and discovered the substantial differences between pears and avocados. (There are worse possible names. The Aztecs thought the resembled a specific part of the male anatomy and used the same word for them; mercifully, 16th-century Spanish explorers couldn’t pronounce the word, and renamed them.)

While we tend to use it as a vegetable, and the “pear” bit could make you think it’s a fruit, it’s actually a large berry. A really, really large berry, with one very big seed in the middle.

There are quite a few varieties of avocados, but the most familiar, bumpy-skinned variety was a lucky accident. In the 1925, a postman named Rudolph Hass bought a small, partially-planted avocado grove after reading a magazine article about making money from selling avocados. The grove had a variety called Fuerte growing on it, so named because the trees are very hearty.

Not having a ton of money, he purchased assorted, scavenged avocado seeds–nobody is quite sure what varieties–from a local man. To get bigger trees faster, growers used a technique of planting three seeds at once, then pulling up the two weaker seedlings and grafting them onto the third. One particular tree refused to take the grafts, and produced the Hass avocado. Every single Hass avocado is a descendant of this tree.

The thing that made the Hass so popular? It’s the only variety that grows avocados year-round. Mr. Hass got a patent on the tree and licensed cuttings from it.

A non-vegan recipe for avocado ice cream appeared in the December 8, 1944 edition of the St. Petersburg Times.

Beat the avocado with the water in liquifier. Add the rest of the ingredients and beat until creamy. Freeze in freezer or refrigerator trays.