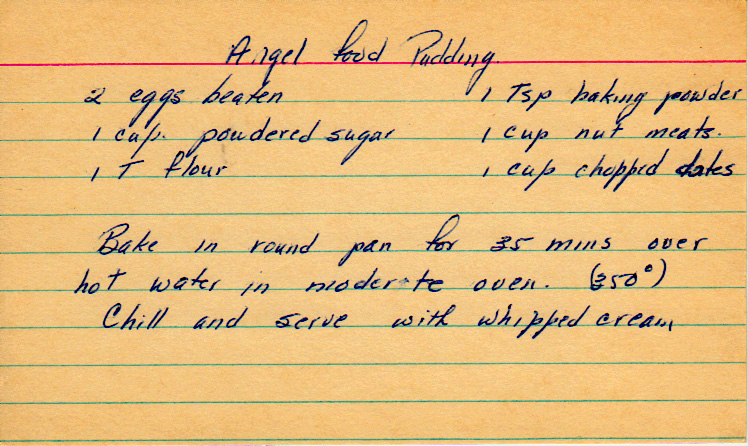 A rich pudding that dates to the same era as its cousin cake.

Wikipedia says the first mention of “Angel Food Cake” in print was in 1884, which seems exceptionally unlikely to be correct, given this mention and recipe of angel food cake in the October 3, 1879 edition of The Iola (Kansas) Register.

That would make the advent of the cake essentially contemporaneous with the pudding. One early recipe appeared in the June 17, 1880 edition of the The Anderson (S.C.) Intelligencer:

But more interesting is to me is recipe with the same proportions as the card, from the “Prize Recipe Corner” in the July 28, 1923 edition of The Toledo News-Bee:

So this recipe made it into this 1960s-era box without much change over 40 years.

Chill and serve with whipped cream.

moderate oven
Usually, 350 to 375 deg. F.
patty pans
In the context of bakeware, a low metal pan with fluted edges used for baking custards, puddings, and tarts. A patty pan squash is a squash variety with a shape that resembles this bakeware.
serviette
A British word for napkin.