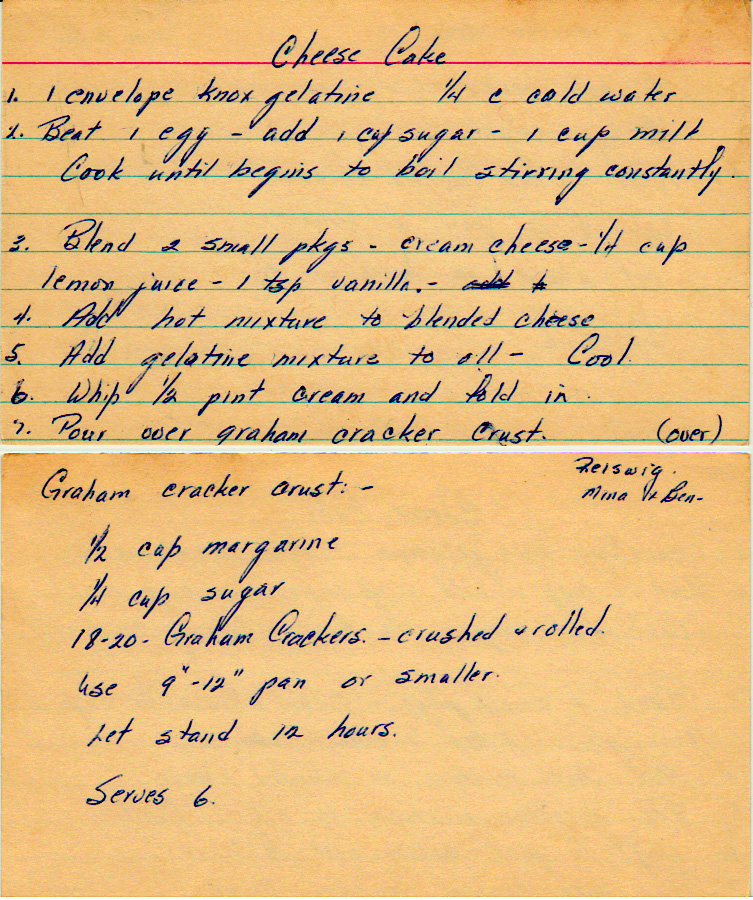 The technique here predates the cream cheese it uses.

While the Romans had cakes that included a type of baked cheese, they didn’t resemble the egg-leavened baked cheesecakes we know and love, which didn’t take form until after the invention of cream cheese in 1872. No-bake cheesecakes, meanwhile, didn’t really catch on until around the late 1950s and early 1960s.

But the technique of thickening cheese with gelatin or starch really is no different than the idea behind blancmange, a thickened dish of cream–and that technique has existed since since the 13th century. And while Roman cheesecake didn’t resemble our cheesecake, most blancmanges can be turned into no-bake cheesecakes by using cream cheese instead of cream and adding a crust.

Consider the following recipe for cherry blancmange from the May 5, 1914 edition of The Washington (D.C.) Herald:

Cherry Blancmange–put one quart of milk in a double boiler, add one tablespoonful of butter. Mix four tablespoonfuls of cornstarch smoothly with one-half cupful of the milk (cold); when the milk in the double boiler begins to boil stir in the cornstarch and let cook ten minutes, add two tablespoonfuls of sugar and one teaspoonful of vanilla. To two cupfuls of stewed or canned cherries add two tablespoonfuls of sugar. Rinse out a mold in cold water, arrange a few cherries on the bottom, then put in some blancmange, then the rest of the cherries mixed with blancmange. Turn out when firm. Serve with whipped cream or a sauce made from the cherry juice. May be molded in individual cups.

Yesterdish suggestion: There’s no particular reason not to use pasteurized eggs in this application, if raw eggs make you nervous.