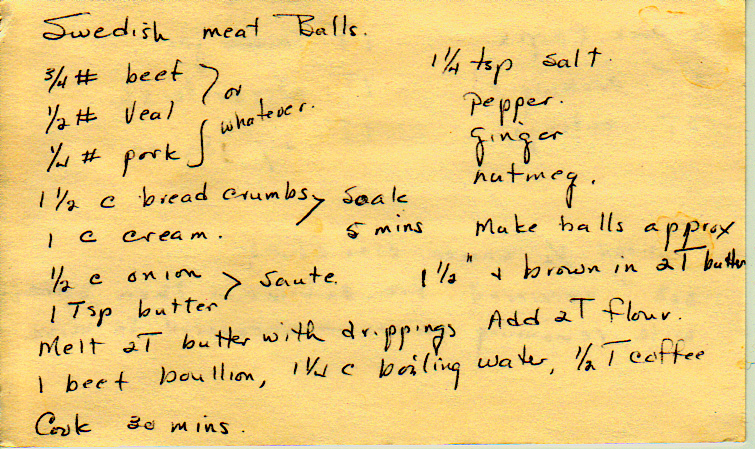 A recurring visitor to American tables.

Swedish Meatballs have had at least three periods of popularity: the early 20th century, the ’50s and ’60s, and today, where the proliferation of Ikea stores serves as a reminder that there’s at least one appetizer you can eat as an entree, if you like. The earliest recipes show up in the eighteenth century, when the scarcity of beef in Scandinavian countries and the labor required to produce meatballs before meat grinders were readily available kept meatballs as a food for the elite.

There’s an unusual degree of variety in this recipe, however. Some version insist on allspice, while some omit it entirely; some suggest reducing in boiling water to make a gravy, while others use cream or stock; but the basic common thread is that the meatballs seem to be designed to be more finely ground than a standard meatball, creating a dense texture, and all are rolled in flour and fried.

To compare methods, here’s a recipe from the March 17, 1915 edition of The Meriden (Connecticut) Daily Journal.