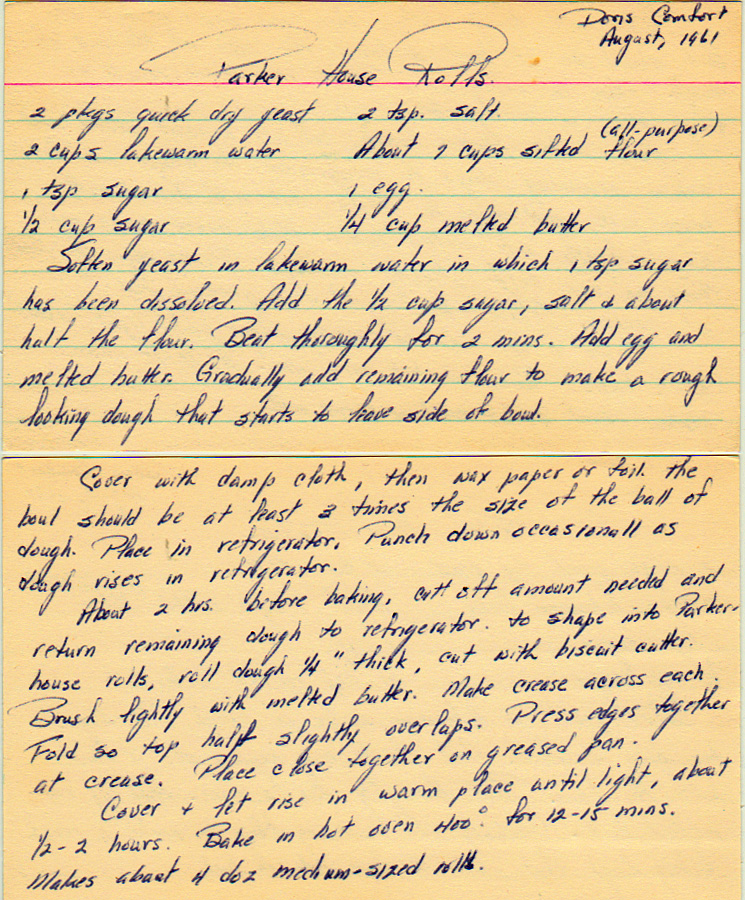 The Parker House Hotel on School Street first introduced their namesake roll in the 1870s. (The Parker House is also famous for giving us another recipe, one they didn’t brand as narrowly: the Boston cream pie.)

Parker House rolls are slightly sweet, very buttery, and sort of half-folded over, as if someone had started to make a taco out of them. They tend to develop a crisp outside and soft, airy inside. The legend behind the shape is that an angry baker threw the rolls into the oven before they’d achieved the traditional shape, but this story is more apocryphal than most, lacking not only a specific factual origin but any relationship to the laws of physics as applied to dough in motion. A recipe for Parker House rolls appeared in Fannie Merritt Farmer’s The Boston Cooking-School Cook Book. It includes the following thoughts on how to form the rolls:

Parker House Rolls may be shaped by cutting or tearing off small pieces of dough, and shaping round like a biscuit; place in rows on floured board, cover, and let rise fifteen minutes. With handle of large wooden spoon, or toy rolling-pin, roll through centre of each biscuit, brush edge of lower halves with melted butter, fold, press lightly, place in buttered pan one inch apart, cover, let rise, and bake.

Soften yeast in lukewarm water in which 1 tsp. sugar has been dissolved. Add the 1/2 cup sugar, salt and about half the flour. Beat thoroughly for two minutes. Add egg and melted butter.

Gradually add remaining flour to make a rough-looking dough that starts to leave side of bowl.

Cover with damp cloth, then wax paper or foil. The bowl should be at least three times the ball of dough. Place in refrigerator. Punch down occasionally as dough rises in refrigerator.

About 2 hours before baking, cut off amount needed and return remaining dough to refrigerator.

To shape into Parker House rolls, roll dough 1/4″ thick; cut with biscuit cutter. Brush lightly with melted butter. Make crease across each. Fold so top half slightly overlaps. Press edges together at crease. Place close together on a greased pan.