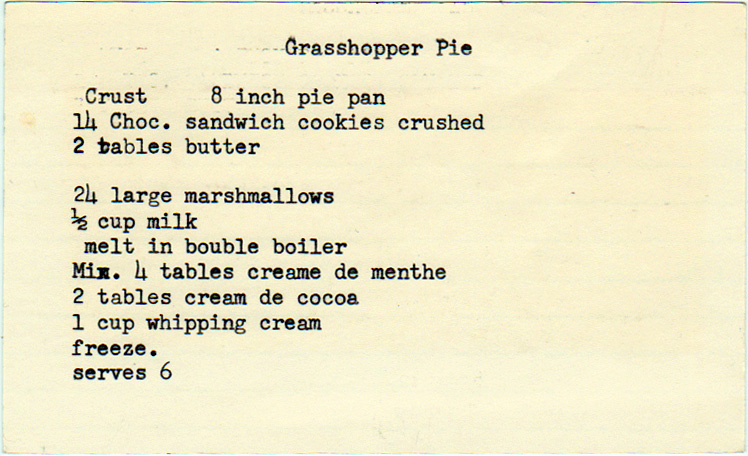 A cocktail crossed with a cream pie.

Grasshopper pie is named after the delicious after-dinner cocktail, the Grasshopper. A Grasshopper is made with equal parts of creme de menthe, creme de cacao, and cream or half-and-half. The pie attempts to recreate the flavor of that basic mixture, thickened and set into a marshmallow base in a chocolate cookie crust.

The cocktail was supposedly created at Tujague’s restaurant, the second-oldest restaurant in the French Quarter. The 157-year-old Tujague’s also claims to be the birthplace of brunch, and if you’ve got a few million in the bank, you might be able to buy it.

As the story goes, in 1928, the then-owner of Tujague’s, Philibert Guichet Jr., entered the cocktail into a cocktail contest judged by Walter Winchell, where it took second place. (Some sources say the original version was layered, but I’ve yet to encounter such a thing.) Unfortunately, 1928 wasn’t a fantastic time to promote a cocktail, given that prohibition was still in effect. By the 1950s, however, it was popular in the south, and that popularity spread.

The instructions are a little skeletal, so here’s a slightly longer explanation: