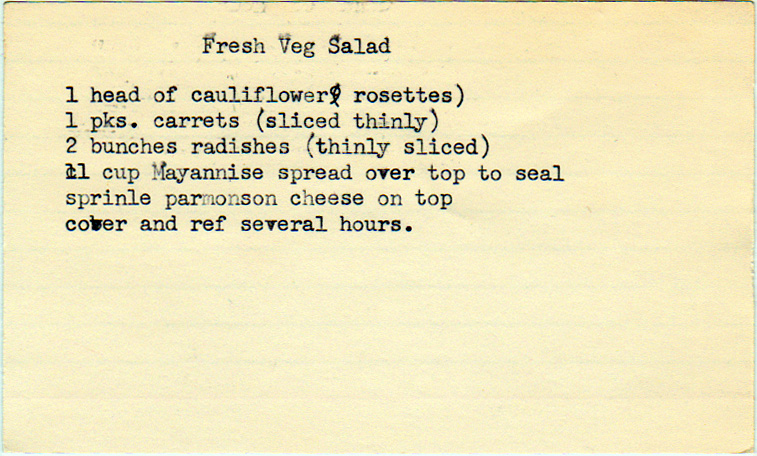 We haven’t talked about cauliflower yet. Although much of it has to do with broccoli, and we have talked about broccoli. Agriculturalists working in Moorish Spain wrote about cauliflower as long ago as 12th century B.C. Like broccoli, it’s a relative of cabbage, and the Italians named it caoli fiori; literally, cabbage flower. Obviously, as the word traveled, the name contracted.

Also like broccoli, cauliflower wasn’t commercially harvested in the U.S. until the 1920s, but the harvest really picked up in the 1940s, when it was a common seed planted in Victory gardens. (The seed packet above is from the 1940s.) The mild flavor had a somewhat broader appeal than, say, its cousin kale, and it is harvested in cool months, providing food well into the fall.

The salad here reminded me particularly of this recipe from a 1940 advertisement for Hellmann’s/Best Foods mayonnaise. A black-and-white version appeared in the September 15, 1940 edition of The Milwaukee Journal. I’m not strictly sure what about this preparation makes it her hubby’s, or what his hobby precisely is, but I can rationalize the salad as coleslaw mixed on your plate.