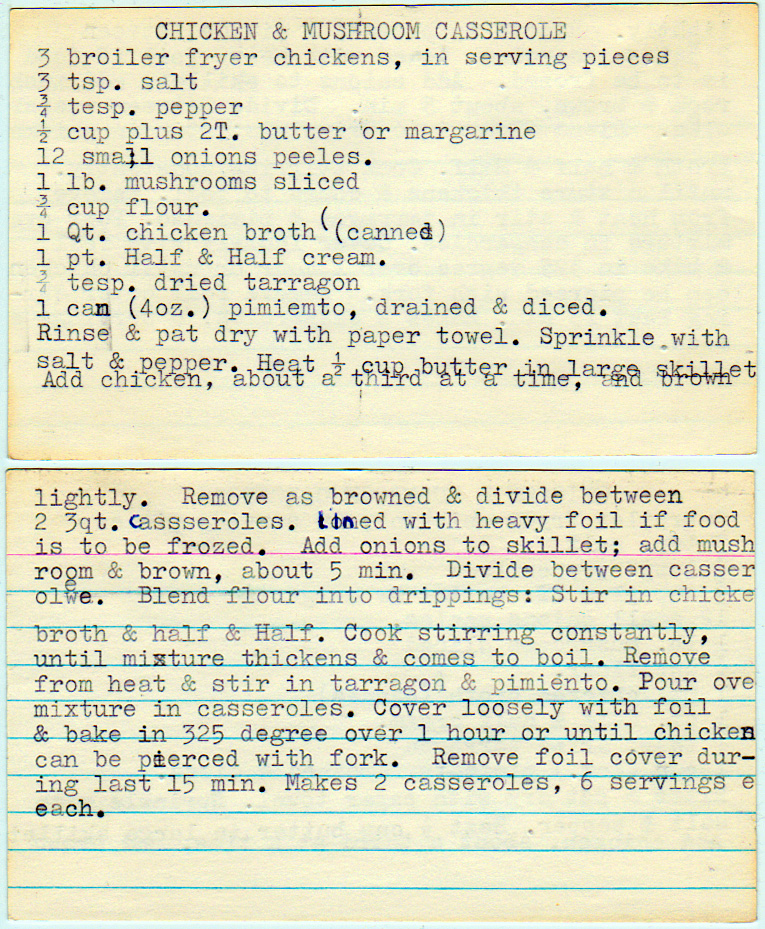 This recipe appeared in the Feb. 3, 1972 edition of The [St. Petersburg] Evening Independent as part of a feature on casseroles you could make two at a time, where one would be frozen for future use.

This sort of preparation was viewed as a money and time-saving technique, and was popular in the 1970s, when the job description of “homemaker” started to take on some kind of political significance. This was, after all, the era of the tater tot casserole, something I’m looking forward to finding in a box in the near future. America wouldn’t have reached its culinary maturity without going through this formative phase.

That said, the only time I find myself freezing things ahead is when I want to give them to someone else later. If the only thing freezing ahead saves me is my own time, well, I’m more than happy to go without sleep in the name of food.

But that’s me. Your results may vary.

Rinse & pat dry with paper towel. Sprinkle with salt & pepper. Heat 1/2 cup butter in a large skillet. Add chicken, about a third at a time, and brown lightly.

Remove and browned and divide between two 3 quart casseroles, lined with heavy foil if food is supposed to be frozen.

Blend flour into drippings; stir in chicken broth and half & half. Cook, stirring constantly, until mixture thickens and comes to boil. Remove from heat and stir in tarragon and pimiento. Pour over mixture in casseroles.

Cover loosely with foil and bake in 325 degree oven for 1 hour or until chicken can be pierced with fork. Remove foil cover during last 15 minutes.