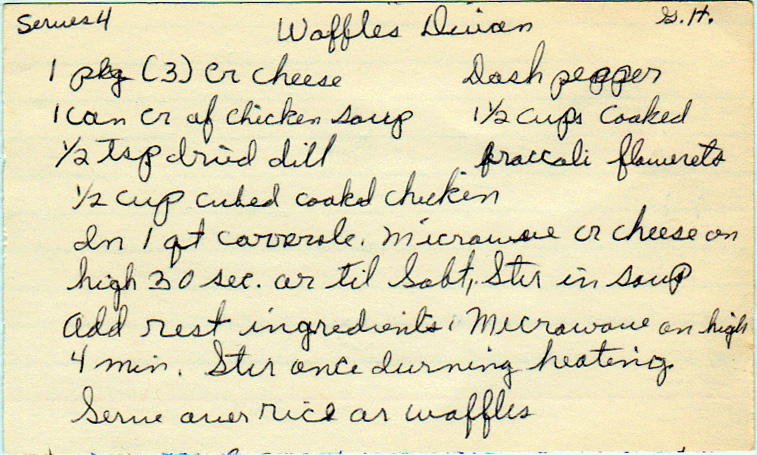 The amount we don’t know about this recipe is utterly soul-crushing. In fact, about two-thirds of what’s out there is contradicted by other sources. But here’s what we do know. Chicken Divan was the specialty of the Divan Parisien, just North of Grand Central Station in the Murray Hill neighborhood of New York. It seems to have moved at some point; some ephemera records the address as at 17 East 45th Street, and the other was in the 300-room Chatham Hotel at 33 East 48th.

Additionally, Chicken Divan was introduced at some point in the 1930s, according to Sue Dawson’s Unforgettable: 100 Year of Timeless American Recipes (which is fantastic, by the way, and Sue’s never steered me wrong). The general structure of that recipe was broccoli spears laid out onto a dish, topped with sliced poached chicken, covered in a sauce (though we’re not sure which sauce exactly), and then broiled a la minute.

That makes particular sense, given that we had just started to commercially harvest broccoli in the late 1920s. The popularity of Chicken Divan would ultimately help popularize broccoli.

But as home cooks started to adapt the recipe, it morphed dramatically into a casserole designed to use leftover cooked chicken, covered in a canned condensed soup, as it is here. And that’s everything I can say with a great deal of confidence about Chicken Divan.

But here’s some of what’s in dispute:

A couple of sources split the difference.The 1990 The New York Times cookbook lists the sauce as a mixture (!) of Hollandaise and and a Bechamel with sherry and Parmesan (it’s not quite sauce Mornay because there’s no gruyere). America’s Test Kitchen seems to follow The New York Times‘ theory.

Is it strictly impossible? Well, no, lots of things are possible. But would a 1930s French restaurant mix two sauces from different mothers? I’ll answer that question with another question: can you point to any recipe anywhere else in French cuisine where two sauces from different mothers are mixed? Anywhere, ever? And if the sauces were, in fact, mixed, why didn’t someone name the sauce? Why would a restaurant that thought to name the dish after itself not name the sauce “Sauce Divan?”

Certainly, the canned soup in the home versions are closer to Sauce Mornay, but that’s a bit like observing that London is closer to Paramus, New Jersey than it is to Manhattan.

And two related questions: why waffles and if waffles, what kind of waffles? Americans had widely adopted electric waffle makers by the 1920s (as opposed to the irons you held over the fire), and by the 1930s, boxed waffle mixes that used baking powder to make the waffles rise were very popular.

But let’s say for the sake of argument this dish was ever served with waffles–while the American baking powder-inspired waffles were popular, they’re extraordinarily un-French. The most likely kind of waffle a French chef would prepare, particularly in the 1930s but even now, I’d argue, is one that rises like a souffle, with beaten egg whites folded into a rich base. Unless it was a part of France close Belgium, in which case, yeast would make the waffle rise.

And this is too complicated to get into here, but… what we call Belgian waffles have no direct relative in Belgium, which has two varieties of waffles, both of which are sweet, and neither of which you would want to eat with chicken and broccoli on top. But what we call a Belgian waffle didn’t really exist until decades after Chicken Divan. That doesn’t mean it couldn’t be used, it’s just another question mark in this confusing recipe.

But… why would they use waffles at all? Why not crepes? Crepes are often savory and a far more likely vistor to the lunch table of a French restaurant of this or any era. If Waffles Divan was a home iteration of a Chicken Divan Crepes recipe, then we’re likely talking about baking powder waffles, the kind you make from a box.

So there’s lots of room for investigation here. For what it’s worth, pay-per-view sources suggest Waffles Divan was being served in the late 1960s, which would’ve made frozen waffles a likely candidate for home iterations and the American-style Belgian waffle possible in restaurants.

In 1 qt. casserole, microwave cream cheese on high 30 seconds or until soft. Stir in soup. Add rest of ingredients; microwave on high 4 minutes. Stir once during heating.

Serve over rice or waffles.