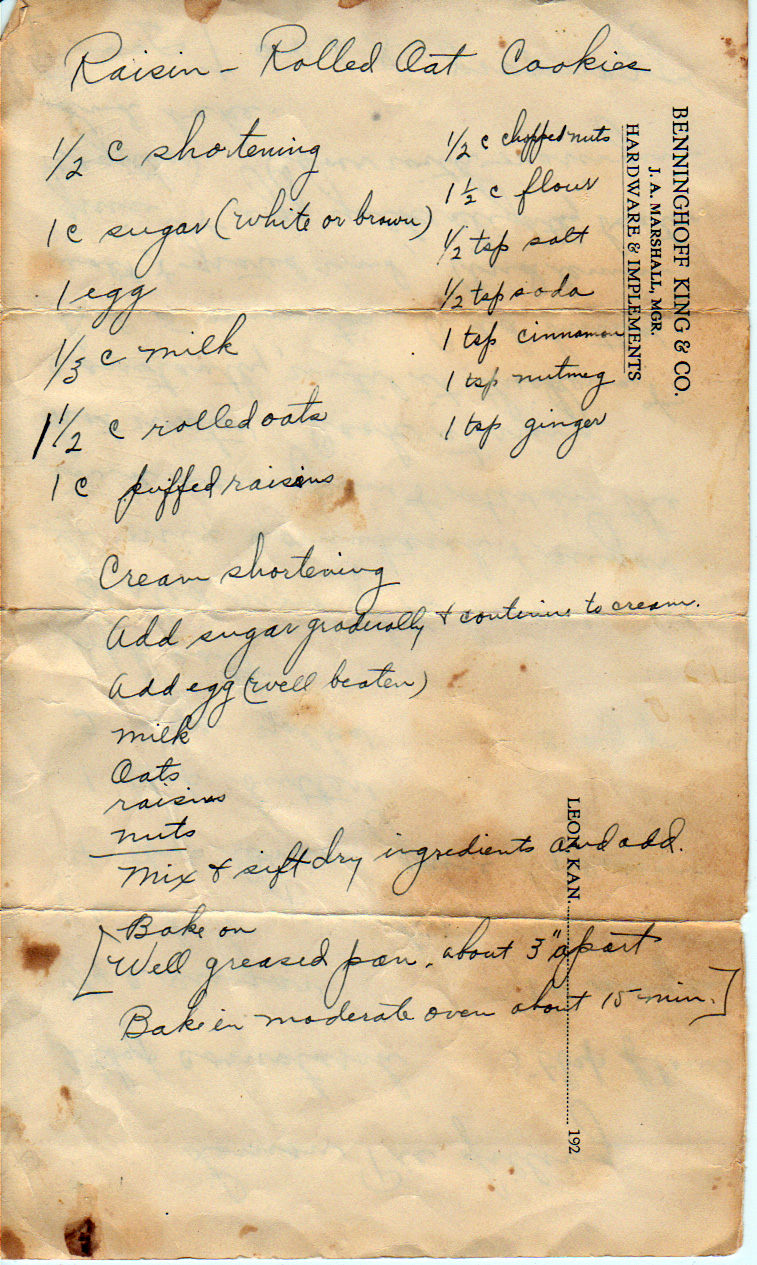 A classic, but not from Fannie Merritt Farmer.

Some sources attribute the first oatmeal raisin cookie to Fannie Merritt Farmer’s 1896 Boston Cooking-School Cook Book. But the image to the left is the page with the oatmeal cookie recipe on it. Do you see raisins? I don’t. There are four or five other cookie recipes with raisins in the book (including Boston cookies), so she could’ve added them. She just didn’t. I also looked at more recent editions (from 1918) to see if she added the cookies later, but unless she at some point put them in and took them back out again, Fannie doesn’t get credit for this one.

The other side of this recipe is the recipe for lemon pie filling.

In the comments, Jonathan asked a good question I had kind of skipped over before: “Yes, but you didn’t address the glaring issue of what in the world puffed raisins are. Do they mean soaked?”

Y’know… that’s good question. I kinda assumed that, but I don’t know for sure. So let’s look around a bit.

Another early version of this recipe, from the September 21, 1927 edition of The (Staunton, Virginia) News Leader, makes no mention of puffing the raisins but cuts them into little pieces, if they had seeds:

Hmm. Well, that gives us a good age for the recipe, but it doesn’t really help us on puffed raisins. Maybe I should look in other contexts. What were puffed raisins in the 1920s?

The November 22, 1925 edition of The Los Angeles Times explains this newfangled modern marvel:

The May 8, 1925 edition of The Palm Beach Post shows the news about puffed raisins was national:

Corcoran is about 30 miles south of Kingsburg, California, and both are in the San Joaquin valley. And raisin growers in the San Joaquin Valley were likely members of the California Associated Raisin Company, a cooperative of family-owned farms that, around 1918, changed its name to incorporate its famous brand name: Sun Maid Raisin Growers of California.

Since the paper said the process is patented, it gives us a hint of where to look: patents filed by the Sun Maid Raisin Growers of California. And surely enough, in January of that same year, there’s a patent application describing what makes these “puffed” raisins.

There are lots of patents for removing seeds from fruit in general, and raisins in particular; prior to 1925, the state-of-the-art raisin seeding machines either aligned the fruit in a single channel and then pressed the seeds out, or pressed layers of fruit between wire meshes that compressed them enough to, in essence, smash the seeds out.

The “puffed” raisin patent has a seeding step that, in all probability, relies on the same technology — the seeding tech itself is not part of the patent. What makes the “puffed” process different is that the seeding occurs when the raisins are hot from pasteurization. The raisins are immersed in hot water to raise them to 212 degrees Fahrenheit for 30 seconds. Then, while the raisins are still hot and malleable, steam pushes them into the hopper of the seeder. After seeding, they fall into a second conveyer that uses blasts of cold air (which, I guess, would be where “puffed” comes from) to cool them to room temperature.

So are puffed raisins just seedless raisins? Not exactly. As the patent explains, the air-drying part of the process makes the raisins stay separate in the box, rather than form a sticky clump. At the same time, the entire process, which takes under a minute and a half, manages to avoid making the raisins too dry or chewy. So a “puffed raisin” is, in theory, dry on the outside and relatively juicy (y’know, by raisin standards) on the inside.

Up through the mid-1960s, “puffed raisins” were advertised in grocery store ads, and recipes used the name to denote any seeded raisins. Now, when puffed raisins were launched, there were naturally seedless raisins available, Thompson raisins, but they commanded a higher price. While the puffing process patent expired in the 1940s, by the 1950s, Sun-maid was selling both puffed raisins and Thompson raisins… and the puffed variety commanded a higher price, in the January 15, 1954 edition of the Union County (Missouri) Tribune:

As Sun-Maid’s site explains, today, most of their raisins come from the Thompson seedless variety, making the puffing process unnecessary. And for our modern recipe purposes, any seedless raisin should do the trick.

Bake on well-greased pan, about 3″ apart. Bake in moderate oven about 15 minutes.

moderate oven
Usually, 350 to 375 deg. F.
puffed raisins
Confusingly, this can mean two different things: either puffed seeded (traditionally muscat) raisins, which are a non-sticky form of raisin (they pour freely out of the box); or plumped raisins, raisins that have been partially rehydrated by boiling, steaming, or soaking. Generally, the older the recipe, the more likely the former is intended. Substitute any raisin.