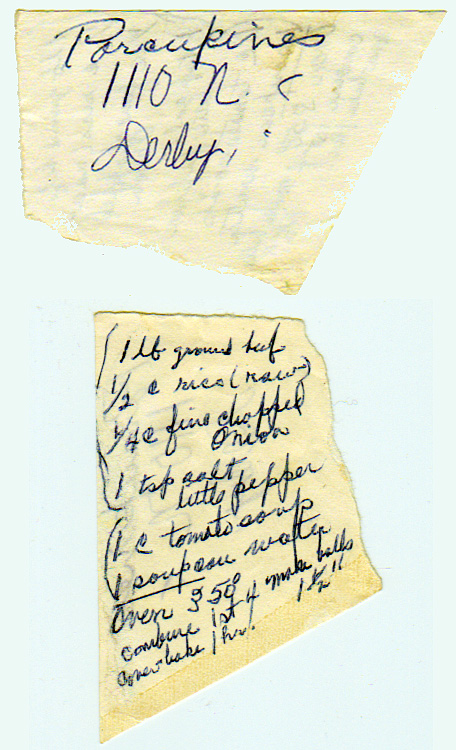 This was the dish that made me consider American food.

At home, it was more complicated. My mother, who spent most of the time she wasn’t at her law practice in the kitchen, cooked all of the above, and lots of other things. The motivation behind her dinners seemed to oscillate between a gentle-but-firm desire to remind her children that the world was bigger than Cleveland (e.g., samosas, lamb pies, dim sum), and a bone-chilling terror that we were going to end up teenage parents working at the strip mall on Cedar road if she didn’t write a ticket out of Ohio with the menu (e.g., slices of giant octopus head and both hot and cold preparations of cow brains).

My basic understanding of cuisine, though, was that you ate your heritage.

One night in high school, I had dinner at a friend’s house. “We’re having porcupines,” his mother said. In my head, I briefly considered the probability that the name was literal, and not evocative, but I ultimately decided that was unlikely, mostly because I didn’t see any cut-proof gloves or pliers in the kitchen, which I’d assumed you’d need in the preparation.

Finally, we sat down and a square, clear tempered glass baking dish filled with little round meatballs in a tomato sauce was presented. Equally alien was that I could smell clove and cinnamon in the sauce, making it look like meatballs but smell like mincemeat. I ate it, and to this day, I haven’t decided if I think it was good or bad. I was too busy trying to find a framework to understand it to form an opinion.

When I got home, I asked my mother about the dish, describing it in detail. She shrugged, waiting for me to get to the part of the story that was interesting. “Yeah, porcupines.”

I furrowed my brow, thinking she didn’t really understand the situation. “The sauce was tomato, but it had clove in it. So… is that from a Moorish occupation? Like in Sicily, or in Spain?”

My confusion was contagious, and she reflected it back. “It’s American cooking,” she said, slowly, as if trying to figure out whether I didn’t understand the words or she wasn’t saying them correctly. “Like macaroni and cheese.”

Macaroni and cheese? Like in the high school cafeteria? (I did usually buy my lunch. About a quarter of the time I took my lunch to school, when my mom packed it; it would end up being sushi or doro wat or quenelles.)

It wouldn’t be till years later that I realized this error wasn’t just mine–that somehow, we hadn’t really recorded American cooking especially well before James Beard, and that since his death in 1985, we’d managed to forget most of what we’d learned.

It was still a year or so after that, when a friend/former co-worker organized a tour of a National Archives exhibit, and I found myself researching the history of the Hangtown Fry, that I realized I could actually do something to contribute to the preservation of American home cooking.

But none of it would’ve happened without that night, in the early 1990s, sitting dumbfounded at the realization that, for all the food I’d tasted, and for all the cultures to which I’d been exposed, I had no idea what was going on in the kitchens up and down the street.

1 can tomato soup
1 soup can water