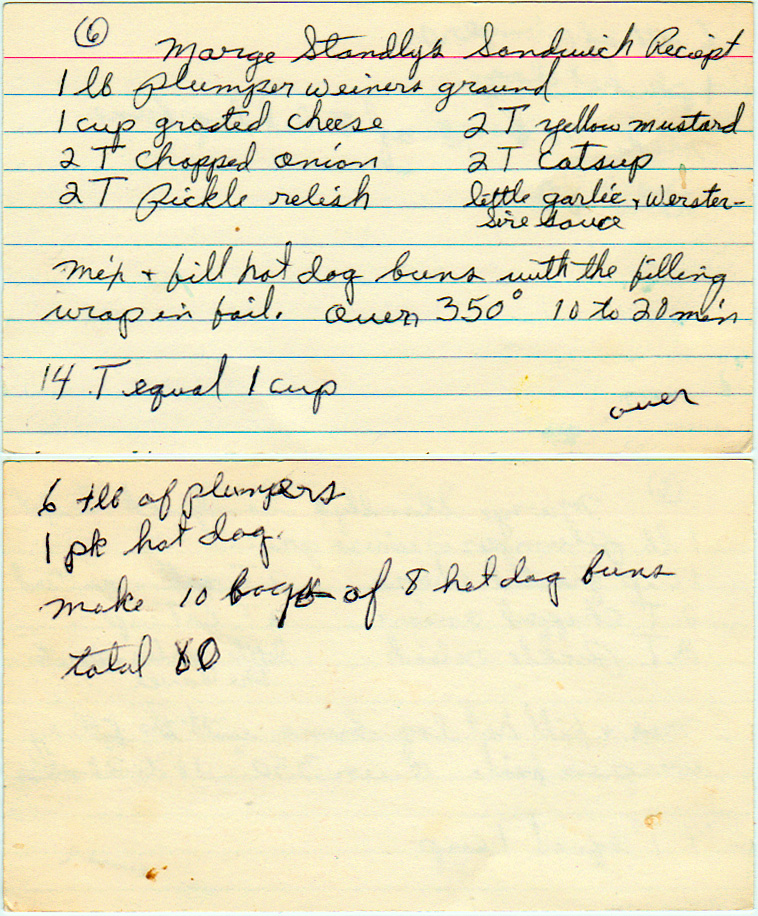 You might notice this card spells Marge’s name differently than the card for Marge Standley’s salsa. So which is the right way? Meet Marge Standley, on the far right. This is from the April 30, 1974 edition of the Waterloo (Iowa) Courier, where she’s receiving an award for her work as an adult Girl Scout.

The other thing in this recipe that requires a bit of regional insight is the mention of “Plumper wieners.”

In 1891, the Dubuque Butchers’ Association and the Dubuque Packing and Provisions company merged to form the Dubuque Packing Company. It was basically a local meat supplier until it was bought by another family in 1931. It started producing canned hams and kosher beef (I mean, not together, obviously) and would grow to become one of the 20 biggest private companies in the U.S., with estimated sales of $796 million in 1978.

Amid declining profits in the 1980s, the plant changed hands in 1982 and 1996, with legal battles and union-vs.-management finger-pointing. The plant would ultimately close in 2000, though the trademark lives on (or at least did, in 2009).

I guess that doesn’t really explain what a Pumper wiener was. Hot dogs plump because the expansion of steam inside a hot dog presses outward on the casing. Why is that attractive? I’ll let the experts explain:

Yesterdish suggestion: I’m not entirely sure what the notes at the bottom mean, but here’s my guess. At the time this recipe was written, there were 6 hot dogs to a package and 8 hot dog buns to a package. This is because bakers and meat-packers had their own ways of doing things (meat-packers liked doing things by the pound, and six Plumpers was one pound; bakers were interested in the size the pans would hold and not so much the weight of the dough).

I’m not sure what iterations of math were going on here–or if the sandwich was even supposed to result in someone having less than a hot dog on the bun–but if you’re in a time machine and go back to the past, I guess plan on 14 packages of hot dogs to 10 bags of buns with 4 extra dogs.

But don’t worry about it now. At some point in the 1990s, bakers and meat-packers managed to coordinate better, and Plumpers (just like most hot dogs) come 8 to a package, just like the buns.