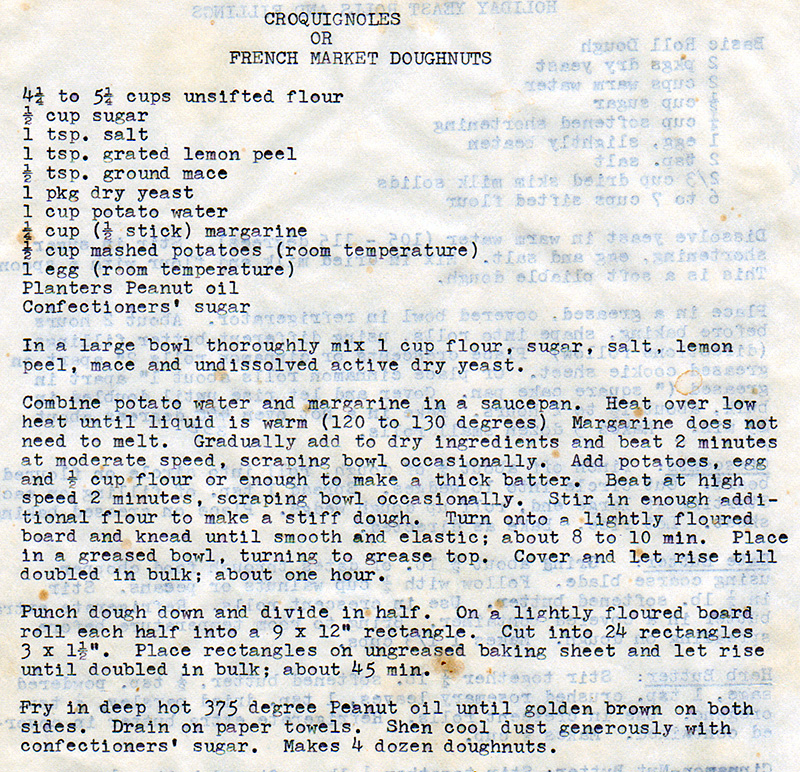 I’ve never seen a recipe for croquignoles like this.

I hesitate to go so far as to declare that these aren’t croquignoles, but if they are croquignoles, they’re a variety that in no way resembles anything else I’ve ver seen described as croquignoles, anywhere, ever. But I can’t claim to be the arbiter of orthodoxy, here, because the word has legitimately been used to describe so many different things.

Most people tend to think croquignoles are basically an elongated beignet. The March 16, 1961 edition of the Meriden (Conn.) Journal is is an example, describing croquignoles as “delectable puffy doughnuts” you get in the French Quarter with cafe au lait.

(That said, the Meriden Journal is affirmatively confused about one thing; they call their beignet-cousins “Creole Croquignoles,” then claim the word came from the Canadian French word croqueeignole, meaning a crisp fried cake. Two problems with this: one, in France, the term croquignole has meant an elongated shortbread cookie since at least the 19th century. Two, while some of the Canadian French displaced from the Maritime provinces, called Acadians, did resettle into Louisiana, they became the Cajuns, not the Creoles. The Creoles descended from French settlers in the Mississippi river valley. So if croquignoles are Canadian, they’re not Creole. But they could be French altogether.)

Weirdly enough, by Dec. 16, 1970, the Meriden Journal had evolved its position on croquignoles to the recipe we see here: a beignet, with potatoes, which it describes as a holiday tradition. (That much, I have heard; in theory, the shape resembles a yule log.)

Emeril has popularized a non-leavened version of croquignoles, and he talks about beignets being uptown and croquignoles being more country. That’s entirely possible, too. There’s a misperception, I think, that Creole is a more refined version of Cajun cuisine, whereas the reality is that they’re two different cuisines with a common 17th century ancestor, and while there are upscale versions of Creole, there are down-home versions as well. So merely being quick and unrefined doesn’t make something less Creole or more Cajun.

Either way, if you gave me this recipe, I’d say it was for potato beignets.

Combine potato water and margarine in a saucepan. Heat over low heat until liquid is warm (120 to 130 degrees). Margarine does not need to melt. Gradually add to dry ingredients and beat two minutes at moderate speed, scraping bowl occasionally. Add potatoes, egg and 1/2 cup flour or enough to make a thick batter. Beat at high speed 2 minutes, scraping bowl occasionally.

Stir in enough additional flour to make a stiff dough. turn onto a lightly floured board and knead until smooth and elastic; about 8 to 10 minutes. Place in a greased bowl, turning to grease top. Cover and let rise till doubled in bulk; about one hour.

Punch dough down and divide in half. On a lightly floured board roll each half into a 9 x 12″ rectangle. Cut into 24 rectangles 3 x 1-1/2″. Place rectangles on ungreased baking sheet and let rise until doubled in bulk, about 45 minutes.

potato water
Water that potatoes have been boiled in. Sometimes used in bread recipes (particularly, semi-obviously, potato bread recipes) as a milk substitute, since the starch changes the viscosity of the water; use within 24 hours of boiling, or substitute milk.