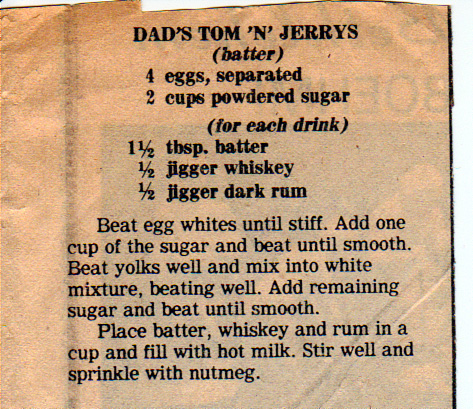 A drink from book, for a play, in a movie, inspiring a cartoon.

In the late 18th and early 19th century, Pierce Egan was a sportswriter in London; he’s actually the origin of the phrase “the sweet science” to describe boxing. His involvement in sports led to an involvement in social clubs, and he wrote a book satirizing the culture, with the somewhat awkward title of Life in London or, the Day and Night Scenes of Jerry Hawthorn, esq., and his elegant friend, Corinthian Tom, accompanied by Bob Logic, the Oxonian, in their rambles and sprees through the Metropolis.

The book was ultimately turned to a series of plays. One of those plays was Tom and Jerry, or Life in London, also in 1821. In order to promote the play and book, Egan created the Tom ‘n’ Jerry drink, which was originally an eggnog with a half ounce of brandy added to it. As the play was running in the U.S. by 1823, the drink became something of Christmas favorite in America’s colder states. During Christmastime, some places have Tom ‘n’ Jerry mixes (generally called batter, since the egg mixture is actually, in essence, a souffle batter) in stores, much as they do boxed eggnog.

There’s a brief mention of Tom ‘n’ Jerrys in on of my all-time favorite movies, 1960’s The Apartment. Jack Lemmon’s C.C. Baxter says, “The tree is up and the Tom ‘n’ Jerry mix is in the refrigerator.” (Start at about 2:32 to cut right to the reference.) (I swear, if you can watch The Apartment and not fall half in love with Shirley MacLaine, you don’t deserve love.)

Because of the behavior of the characters in the play, “Tom and Jerrys” became an expression used to describe rowdy characters in the late 19th century. Ultimately, the echos of that connotation likely led to a certain cat-and-mouse duo borrowing the names.

Place batter, whiskey and rum in a cup and fill with hot milk. Stir well and sprinkle with nutmeg.