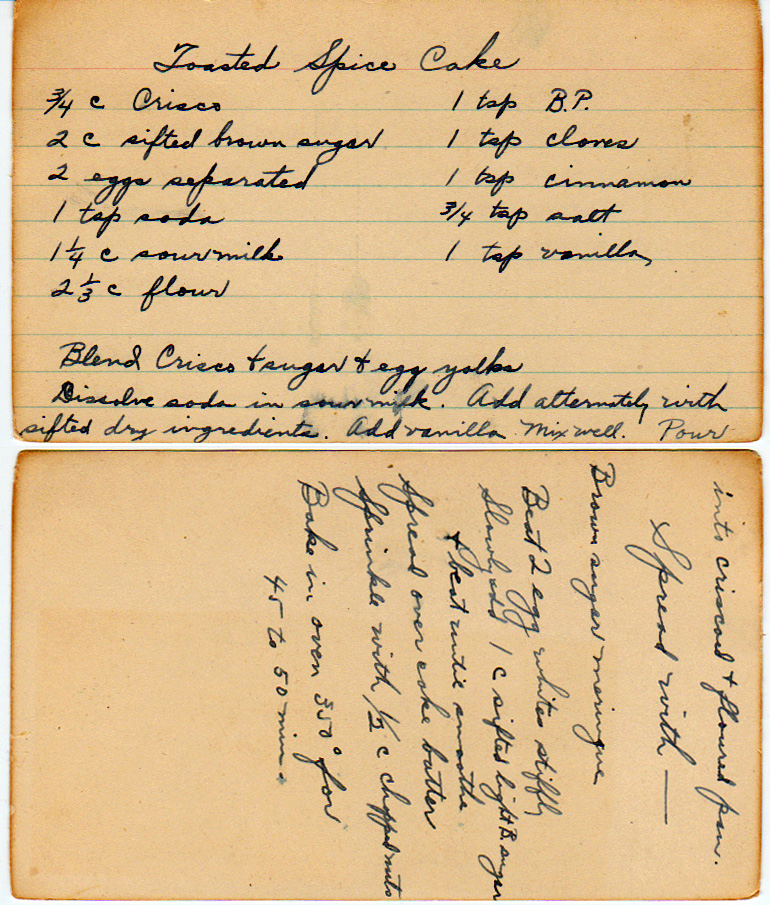 A spice cake with a meringue topping. Here’s the card turned so you can read the rest without hurting your neck. At first, I thought it said “Frosted Spice Cake,” which is a thing, but not with a meringue top. The earliest reference I could find to this specific cake was the June 4, 1933 edition of the Berkeley Daily Gazette.

Why toasted? As the April 8, 1938 edition of The Southeast Missourian explains: “It is quickly made because the dry ingredients do not have to be sifted numerous times and the icing is baked on it. This latter quality is responsible for the ‘toasted’ in its name.” Is it possible L.S. cribbed this from The Southeast Missourian? Unlikely, for two reasons. One, based on other recipes, L.S. probably lived in Kansas in the 1930s; even Joplin, where the box ended up, is in Southwestern Missouri. Two, the specific reference to Crisco in the 1930s suggests this was a recipe Proctor & Gamble was marketing. (And sure enough, it turns out that’s the case… click to enlarge.)

While we think of Crisco as a product that dominates its market today, that wouldn’t have been the case in the 1930s. Although really, this story starts in the early 19th century, in Cincinnati, Ohio.

Olivia and Elizabeth-Anne’s father, Alexander Norris, made the observation that William and James ought to go into business together, as candle-making and soap-making in those days required the same raw ingredient: tallow. With increased purchasing power of tallow, economies of scale could help increase profits for both brothers. And thus, Proctor & Gamble was formed in 1837.

Tallow is, of course, a product made by rendering beef fat. (I mean, it can come from other animals, but as a practical matter, in the United States, tallow is made from beef fat.) So Proctor & Gamble’s fates were, like it or not, intertwined with the cattle industry. The meat-packing industry changed quite a bit in the 19th century. In 1852, the Baltimore and Ohio railroad reached the Ohio River. The transcontinental railroad was finished in the 1860s. And as the railroads made it easier to transport cattle, meat-packing plants started to grow in power, because they could process more animals more quickly. Towns no longer needed individual slaughterhouses, and all that economic power started to concentrate in the hands of a few large companies.

So P&G looked for tallow substitutes. It started acquiring cottonseed mills, and in 1907, helped develop the process of hydrogenation to turn cottonseed oil into something that looked, basically, like tallow. Now, having created this product… what else can you do with it?

Feed it to people.

Crisco was first introduced to market in 1911, and Proctor & Gamble published cookbooks to explain to housewives how to use this peculiar substance. (Even today, vegetable shortening stands out as one of the only products we add to food that has no taste or smell.) While it was gaining market share, it was comparatively uncommon for a recipe to call for vegetable shortening unless it was written by someone trying to figure out what the heck to do with this stuff.