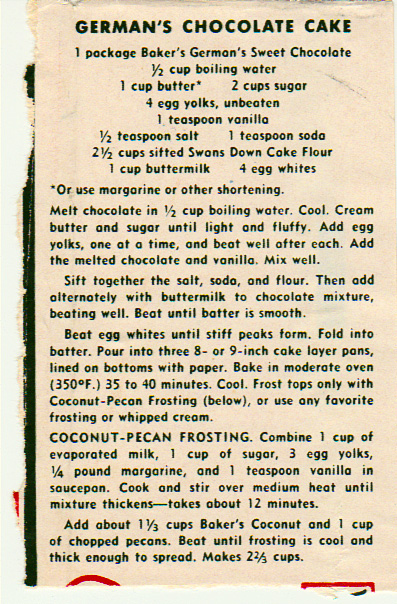 An American product with a curious history. In 1764, Dr. James Baker met John Hannon in Massachusetts. Hannon, an Irish immigrant, had been trained in the process of making chocolate, and Baker, who operated a general store, had money to invest. In March 1765, Baker gave Hannon an investment that started a partnership producing Hannon’s Best Chocolate.

In 1779, Hannon apparently died at sea. (It’s not clear if he was on his way to the West Indies to purchase cacao or just trying to leave his wife.) His widow Elizabeth attempted to continue the business, hiring her husband’s former apprentice to work with Baker, but in 1780, Baker bought Elizabeth’s share, and renamed the product Baker’s Chocolate.

The core of this recipe is Baker’s German’s Sweet Chocolate–named after two Americans, neither of whom were Bakers or German.

German proved his worth in 1852 when he came up with a special formulation of chocolate. When baking, chocolate could easily become too intense or bitter; by adding more sugar to the bar and reducing the cacao content, it was easier to make a mild chocolate. (Today, we’d go pick up milk chocolate if we wanted something milder, but milk chocolate bars didn’t exist until 1875.) Later that same year, Walter Baker died, and his brother-in-law, Sidney B. Williams, leased the company from the late Walter’s estate. Williams had the bad taste to die two years later on a trip to Montreal (let that be a lesson to you, travelers).

As the mythology goes, Mrs. George Clay submitted a recipe she titled German Sweet Chocolate Cake to the Dallas Morning News. It ran in the paper’s “Recipe of the Day” feature on June 3, 1957. (The paper sells its archives, else I’d include it here. Congrats, DMN, you’ve thwarted my clever attempt to say you once did something interesting, half a century ago.) The recipe caught on immediately, but the dropped punctuation from the name of Baker’s German’s Sweet Chocolate resulted in Teutonic attribution of this American dessert.

That’s all true. It’s just that it kind of ignores a hundred years of cake-making. The implication of the story is that the German Chocolate Cake jumped out of Mrs. Clay’s imagination like Athena from the head of Zeus. And it didn’t work that way at all. It’s an asinine claim. At best, Mrs. Clay contributed the name and tweaked some existing recipes. Or consider the Feb. 8, 1951 edition of The Sydney Morning Herald, which has a recipe for a chocolate cake with walnuts and coconut. Or this ad in the Aug. 21, 1951 edition of The (Spokane, Wash.) Spokesman-Review that suggests topping devil’s food cake with coconut and chopped nuts. Or the Dec. 11, 1953 recipe in the St. Petersburg Times for French Chocolate Cake that calls for melted chocolate, buttermilk, and coconut. And these are just the obvious ones, ignoring the pay-per-view sources and the chocolate nut layer cake that won the 1953 bake-off.

This isn’t to diminish the recipe or Mrs. Clay’s role in popularizing it, even if the primary asset she added to the recipe was the poor attribution to Mr. German in the name. And we all love a good mythology. But we love a good recipe more, and this one doesn’t need the window-dressing, because the actual story of Baker’s German’s Sweet Chocolate Cake is plenty absurd.

After all, the core of this recipe is Baker’s German’s Sweet Chocolate–named after two Americans, neither of whom were Bakers or German. The colors here match the German’s label that was used until at least the 1980s; that there are two colors on this side of the label tells us this was printed on the outside, because while the recipes did did appear inside the label, only the outside was printed in color.

*Or use margarine or other shortening.

Melt chocolate in 1/2 cup boiling water. Cool. Cream butter and sugar until light and fluffy. Add egg yolks one at a time, and beat well after each. Add the melted chocolate and vanilla. Mix well.

Sift together the salt, soda, and flour. Then add alternately with buttermilk to chocolate mixture, beating well. Beat until batter is smooth.

Beat egg whites until stiff peaks form. Fold into batter. Pour into three 8- or 9-inch cake layer pans, lined on bottoms with paper. Bake in moderate oven (350 deg. F.) 35 to 40 minutes. Cool. Frost tops only with Coconut-Pecan Frosting (below), or use any favorite frosting or whipped cream.

Add about 1-1/3 cups Baker’s Coconut and 1 cup of chopped pecans. Beat until frosting is cool and thick enough to spread. Makes 2-2/3 cups.