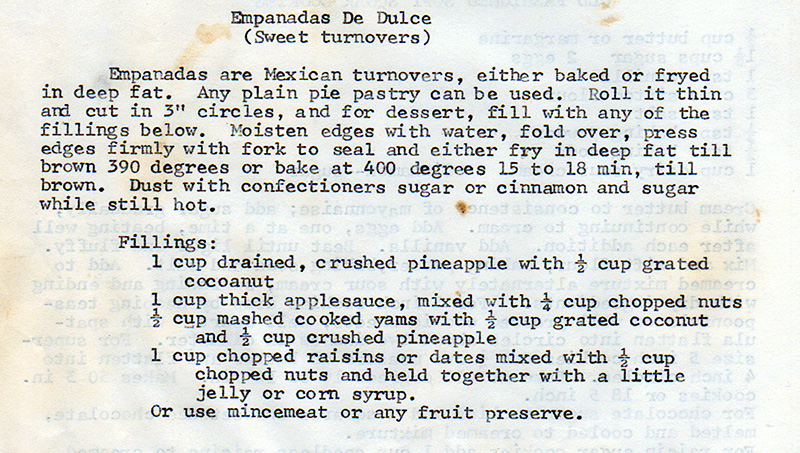 Mexican turnovers? Sort of, I guess. There are empanadas in Mexico. And there are tacos in Kansas, and there’s clam chowder in North Dakota, and there’s duck a l’orange in Hokkaido, and you can go enjoy a Big Mac in Caracas.

While empanadas are common to many countries in Latin America, the likely path they took was from Portugal by way of Brazil. To the extent Mexican empanadas are occasionally different, they get that influence from British miners, who introduced Cornish pasties to Hildago when they came to mine silver in the early 19th century. Along with their tradition of meat or sweet potato-filled hand pies, they brought a game they called football…

Empanadas are Mexican turnovers, either baked or fried in deep fat. Any plain pie pastry can be used. Roll it thin and cut in 3″ circles, and for dessert, fill with any of the fillings below. Moisten edges with water, fold over, press edges firmly with fork to seal and either fry in deep fat till brown, 390 degrees, or bake at 400 degrees 15 to 18 minutes till brown. Dust with confectioners sugar or cinnamon and sugar while still hot.