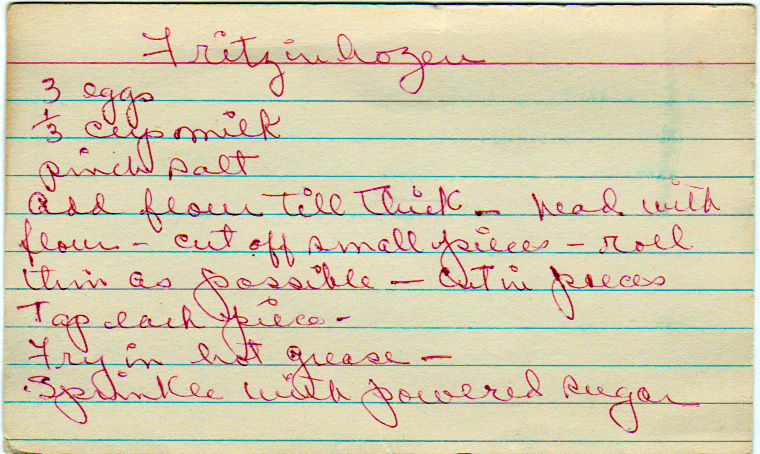 It’s hard to say much about this recipe, especially since there is no such thing. The only reference of any kind online is someone mentioning that a restaurant’s beignets were the same as his/her mother’s “fritzen hosen,” which they describe as a german doughnut.

Uh huh. Well, here’s what I can tell you. Most doughnuts have their origins in Germany. Beignets, however, are French. The most “beignet-like” doughnut in Germany is spritzkuchen, a choux pastry doughnut that’s piped into a ring (traditionally) and then fried. We call them crullers.

But beignets are leavened. And choux pastry is made with butter or fat of some kind. This is eggs, milk, salt, and flour, rolled thin, fried, and dipped in powdered sugar.

What these actually sound like are cenci, an Italian fried pastry that’s eaten like a cookie. We have them for Christmas, but I think they’re traditionally part of pre-lent festivities. The name means tatters, and that’s what they look like–little, rolled-flat strips with jagged edges, sometimes tied in knots before frying.

So where the heck do they come up with fritzinhozen? Beats me. That means Fritz’s pants. I suppose things that look like tattered cloth could look like pants. And that’d also explain the weird description of these as doughnuts; if “long john” can be a doughnut, why not pants? It could also be the name was itself a mishearing of a romance language, where both French and Italian would have words meaning fried that sound like “fritz.”

If you have any more information about Fritz’s pants, please let me know…