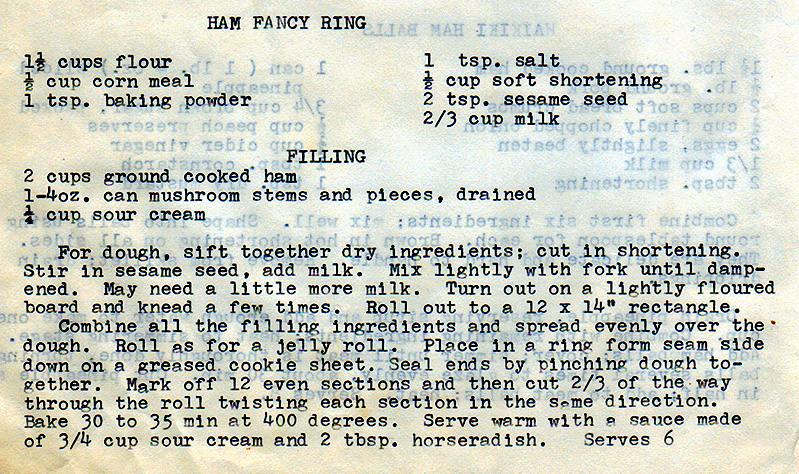 Between the early 1940s and early 1970s, a ham ring was a welcome addition to holiday tables. Not just ham rings baked in a crust, either. Recipes for jellied ham rings and fruit-covered ham rings show up even more frequently. Either our per capita ham consumption has gone down quite a bit since the 1970s, or people are sneaking ham sandwiches every time I’m not watching.

The closest historical version of this recipe I’ve found so far is in the July 27, 1941 edition of The Milwaukee Sentinel, which suggests a baking powder-leavened dough filled with a mixture of deviled ham and cream.

For dough, sift together dry ingredients; cut in shortening. Stir in sesame seed, add milk. Mix lightly with fork until dampened. May need a little more milk. Turn out on a lightly floured board and knead a few times. Roll out to a 12 x 14″ rectangle.

Combine all the filling ingredients and spread evenly over the dough. Roll as for a jelly roll. Place in a ring form, seam side down, on a greased cookie sheet. Seal ends by pinching dough together.

Mark off 12 even sections and then cut 2/3 of the way through the roll, twisting each section in the saem direction. Bake 30 to 35 min. at 400 degrees.

Serve with a warm sauce made of 3/4 cup sour cream and 2 Tbsp. horseradish. Serves 6.