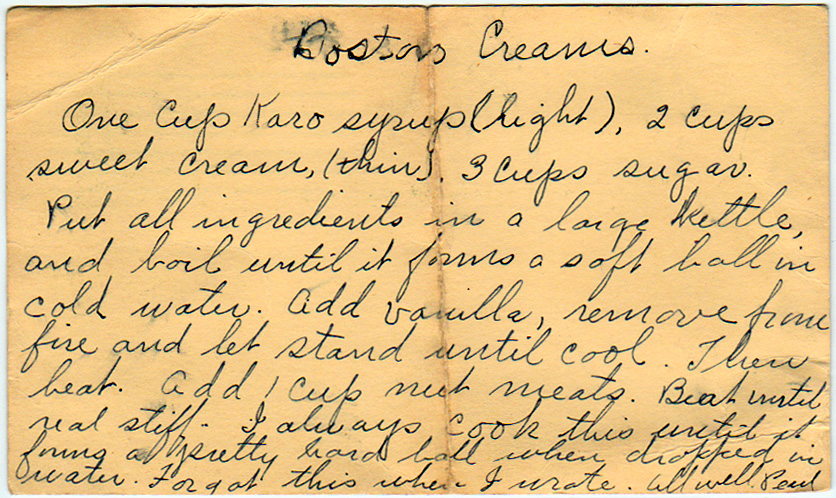 Boston Creams are a candy with a history that long predates this postcard. There’s a reference to them in an advertisement from the Dec. 12, 1889 edition of the Warsaw (Indiana) Daily Times.

Essentially, they’re a bit like a very soft nougat, except a nougat would be made with egg whites. Technically, it’s a poured fondant, which is a bit different than the rolled fondant we’re used to thinking about. It’s a traditional option for using as the center of a pecan log, or the candies would be cut into individual bites and dipped in nuts, chocolate, or both.

The back of the postcard has its own interesting quirks. If the address seems a bit strange, remember that ZIP codes weren’t introduced until 1963, and their precursor, postal zones, didn’t come into existence until 1943. While it would be traditional to include a street address, it wasn’t strictly required in a place like Ness City. In 1940, Ness City had a population of 1,355. In the 2010 census, it had a population of 1,449.

As for the directive “this side of card is for address,” until March of 1907, you were not permitted to write anything except an address on the address side of postcards. That’s the month that the post office started accepting postcards with a divided back, with one side for an address, permitting the souvenir postcard to start making its way through the mails. You’re welcome, Niagara Falls. But these directives were what identified postcards to a generation of people, so the instruction remained on the variety with pre-printed postage.

Put all ingredients in a large kettle and boil until it forms a soft ball in cold water. Add vanilla, remove from fire and let stand until cool. Then beat.

I always cook this until it forms a pretty hard ball when dropped in water. Forgot this when I wrote.