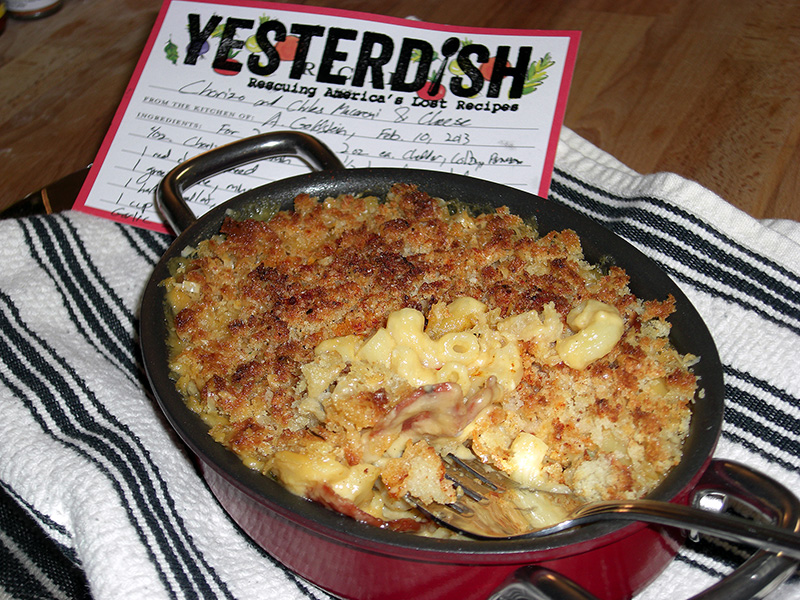 With the snow keeping so many of us home, some comfort food is in order. Macaroni and cheese is as American as apple pie, and like apple pie, it has French ancestors. Thomas Jefferson encountered macaroni in Paris in the late 18th century, and in 1802, served a “macaroni pie” at a state dinner.

That same year, a refugee from the French revolution named Louis Fresnaye was selling coiled vermicelli from his shop on 57 South Front Street in Philadelphia. He gave purchasers a sheet with two recipes on it: one for serving the vermicelli with meat, and the other which called for boiling the pasta in milk, then laying it in a casserole dish, topping it with Parmesan, and baking it.

Macaroni and cheese may be a simple thing, but don’t underestimate the importance–culinary and otherwise–of simple things done well. While macaroni and cheese is a beautiful canvas, I always feel it needs more spice, whether that means a dash of Tony Chachere’s creole seasoning or fully involved construction as we see here. Not that I can claim a great degree of originality, here. Putting chorizo in macaroni in cheese is getting to be common. But it’s common for a reason: it’s delicious.

Now that you’re getting to the recipe, don’t panic. I know it looks like it has a lot of ingredients and a lot of steps, but it really doesn’t. I was offering more detail than perhaps was necessary, and you don’t even necessarily need all of the ingredients and spices. This is a recipe about technique, not proportions (apart from the bechamel proportions, which are adjusted to accommodate for the cheese). From a high-level standpoint, you’re rendering the chorizo; boiling the macaroni two minutes short of al dente, then rinsing it to cool; making a roux while scalding the milk in the macaroni pan; making the bechamel; seasoning it, tossing the macaroni and chilies in it; topping it with bread crumbs; and baking it. Although, I admit, I did have to make the sauce twice. I broke it the first time because I was paying attention to the other recipe I was making. I turned away from the pan with a beautiful smooth sauce in it, and when I turned back about 45 seconds later, it had the dreaded grainy texture of overcooked curdled milk products. There’s nothing to do once that happens but start over. (See? Don’t panic, this kind of thing happens to everyone.)

The second time, I took out a little insurance policy: I added two slices of fat-free American cheese.

Why? Because so many stabilizers are required to keep slices of fat-free American cheese in hypothetically cheese form that adding just a little bit to a bechamel as soon as it comes together makes it nearly impossible to break the resulting cheese sauce. It’s not as if the fat-free slices are going to overpower the flavor of aged cheddar; the only result is a perfect texture.

Julie had the idea to make mac and cheese, and the proofreading skills to tell me I typoed in this when I first posted it. Thanks!