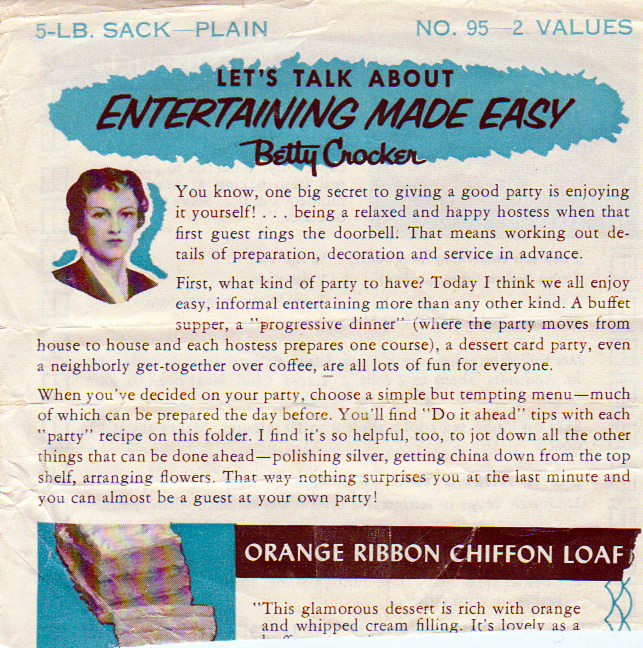 More advice from a Gold Medal Flour insert. We had a progressive dinner club a few years ago, but I didn’t realize how classic the tradition was. Can we get that started again, folks?

You might be wondering who Betty Crocker is, as depicted on this insert and the Foods Men Like insert. In 1921, the Washburn Crosby company of Minneapolis started signing their responses to baking questions “Betty Crocker” to give them a more personal touch. The name Crocker was taken from a retired executive; the name “Betty” was chosen because it sounded friendly. (No argument there; I read Archie comics growing up, and Veronica Crocker sounds like a snob.)

All company executives needed then was a signature. They held a contest among female employees, and a secretary’s script became the signature that is still used, in slightly modified form, today.

In 1924, a radio show devoted to cooking was created using the Betty Crocker name and a platoon of different female voices regionally. In 1928, the Washburn Crosby company was one of six that merged into General Mills.

So, given that there wasn’t a real Betty Crocker, who is this stern-faced woman? She’s a composite of the women who worked in the home economics department at the time it was painted, in 1936. This face was used until 1955. Since then, it’s changed about another half-dozen times, most recently in the 1990s, supposedly to make Betty appear to have a more indistinct ethnic origin.

The cynic in me says, “in marketing, if you’re not pandering, you’re not trying hard enough.” But to be fair to Betty Crocker, she was always meant to be the composite face of American culinary wisdom, and America has always been a melting pot. From that perspective, it would be dishonest if she didn’t change.

Let’s Talk About Entertaining Made Easy

You know, one big secret to giving a good party is enjoying it yourself! … being a relaxed and happy hostess when that first guest rings the doorbell. That means working out details of preparation, decoration, and service in advance.

First, what kind of party to have? Today I think we all enjoy easy, informal entertaining more than any other kind. A buffet supper, a “progressive dinner” (where the party moves from house to house and each hostess prepares one course), a dessert card party, even a neighborly get-together over coffee, are all lots of fun for everyone.

When you’ve decided on your party, choose a simple but tempting menu–much of which can be prepared the day before. You’ll find “Do it ahead” tips with each “Party” recipe on this folder. I find it’s so heplful, too, to jot down all the other things that can be done ahead–polishing silver, getting china down from the top shelf, arranging flowers. That way nothing surprises you at the last minute and you can almost be a guest at your own party!